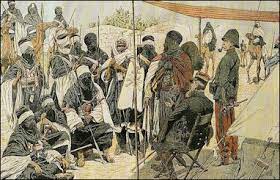 Who were the Berbers?

The Berbers were the first inhabitants of North Africa. The origin of the Berbers is debatable but it is evident that they were people who held to animistic practices before the introduction of Islam in the region through the efforts of many religious movements. This article seeks to examine the resistance of the Berbers against the Arabs starting from the seventh century and the eventual fall of the people.

The Berbers, for a millennium, resisted the Arabs from invading their land. They successful sent the Arabs back to where they came from. Many factors were attributed to the success of the Berbers.

The Berbers understood the geography of their land, unlike the Arabs who ran into dangerous zones where there were wild animals; they lived in a sanguineous society, and they were able to build a strong army among others.

Unfortunately, they were conquered, when the Arabs started to understand the topography of the land just like the inhabitants. All the dangerous zones were known to them, and they had known the nooks and crannies.

Military Prowess of the Arabs

The Arab army was indefatigable and they were resolute and ardent fighters. Their determination to control the Bilal-al-Magrib (land of the Berbers) was held high in their mind until they later achieved this. The Berbers at first got the knack but later lost it after one thousand years of resistance, so the Arabs easily conquered North Africa.

Collaboration of the Berbers Women

Some scholars have refuted this claim as a mere distortion of reality staged to document by propagandists, just like the stressed course of the aggressive Christian crusades’ attacks on Muslim Ottoman and the fall of Constantinople. Lastly, the trade between the Arabs and the Berbers also staged the arabization to take quick effect.

Conclusively, the Berbers were able to resist for over 500 years, but later they were disjointed diplomatic relations among the Berbers. And also, the Arabs had known and understood the geography of North Africa, their possession of weapons that were absent in North Africa prior to the contact, the occupation of the Berbers were exogamous, the relationship between the wives of the Berbers with the Arabs among others, all led to the fall of Berbers’ resistance in the region.