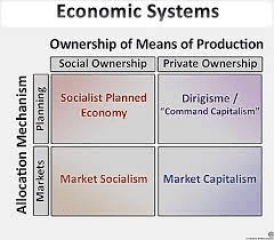 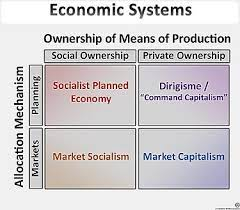 Economic thoughts are theories, laws, and principles guiding economic situations at a particular period of time. That is, this thought will be responsible for the pattern of relations among participants of such an economy. Feudalism, mercantilism, capitalism, socialism are examples of economic thoughts.

Feudalism is an economic thought that prevailed in Europe from the fifth to the fifteenth century. Land ownership was the basis of status. The first inhabitant of a particular geographical area became the original owner of the land and the next inhabitants took shares of lands from the lord. The arrangement was usually from lord to serf. Putting emphasis on land, as against monetary economy, traditional norms and customs solve the basic economic questions, and transactions were made through ‘trade by barter system. While feudalism is a thought stressing the importance of land, the traditional economy is a framework for the operation of such an idea. The traditional economy as a system that emphasizesland as a basic factor of wealth-making.

Mercantilism is an economic thought that encourages the wealth accumulation of a nation by increasing its exportation in order to acquire gold and silver. It prevailed in the 15th- 18th century in Europe. A mercantilist state should encourage local industries and shun excess importation of finished products. Also, the thought stresses that the state should be controlling the economy and vassal states could be forced to import products from the mother (mercantilist) country.

Britain, France, and the Dutch companies were perfect examples of mercantilist states. It is important to state that mercantilism then encouraged European merchants to trade for slaves in Africa during the slave trade in order to engage them in plantations in the New World.

The idea encouraged the state’s accumulation of wealth in form of bullionism, at the expense of other competing powers. A mercantilist state could also use military might to secure a free flow of trade at her wishes and caprices and at the same time could put high tariffs on foreign goods in order to shun foreign domination over the local industries.

Briefly, while capitalism is a thought which preaches a free-mode system–stressing the absence of government intervention in economic decision making, socialism in contrast preaches the management of economic activities by the state in order to provide the needed services to its citizens. Equality is the goal of socialism while profit is the goal of capitalism.

Lastly mixed economy is the combination of both capitalist and socialist economies. It is an economic system in which the production and distribution of goods and services are determined by both the government and individual- producers and consumers. The forces of demand and supply, and the equality of individuals are the dual goals of this system. In a situation whereby the producers fail to produce needed goods and services, the government embarks on such a project. However, too much government interventionism is a flaw of this system.

The basic economic thoughts and systems have been examined. It is needful to state that there are diverse types of economy which may be in relation to ethnicity, religion, state among others.