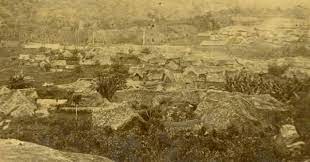 Ogun Okuta was the first indigenous revolt to occur in Akure, that was during the era of colonisation. During the reign of Adesida I (the colonial era), the indigenous people of Akure kingdom, tired of the British obnoxious taxation system, and the excessiveness of their Oba, waged massive revolt in 1931 against the duo oppressive elements- the king and the colonial masters.

The immediate cause of the revolt was the increment of taxes by the colonial government in Akure. Albeit, taxation was not new to these people, but the price took increment as of 1929,  perhaps due to economic regression of the British empire as a resultant effect of the First World War (1914-1918) or the shortage of capital for the effective administration of the colonies.

In 1917 the Native Authority Revenue Ordinance introduced a direct tax system into the Southern Provinces of Nigeria by Frederick Lugard, 1st Governor-General of the amalgamated Northern and Southern Protectorates (1).

The tax by 1931 was increased from three shillings to six shillings, and this became a great burden on the people. These people feared being ousted out of their various economic activities, just like the Aba Women’s Riots of 1929, therefore they made a collective protest against king and their unfriendly colonial masters in 1931 by stoning the king’s place, the king and the colonial officials during a meeting in the community hall.

In another story, the uproar started when the British officials and Oba Adesida I called the meeting of the community to discuss the increment of taxes.

At the meeting, the people resented the innovation and, being tired of the British age-long maltreatment, used the sphere to present massive protest by stoning the king and the officials at the podium.

Very pertinent to note was that the Ogun Okuta of 1931 in Akure was not monocausal. The development of the increment of taxes was just the immediate cause of the revolt. According to Dr. Faboyede, the revolt has multifarious causes and consequences.

According to Dr Faboyede, the corrupt nature of the Customary Court, the excesses of Oba Adesida, and others were factors that led to the outbreak of the 1931 Missile War. A litigant filing a case must bring certain foodstuffs including shillings, tubers of yams, firewood, gin, and others.

This made life hard for the people and made them report the case to the District Officer (D. O.), Mr. G. G. Harris at Ado-Ekiti who issued a query to one of the court clerks involved, Mr F. S. Adeoba (2).

It is also important to state here that the obnoxious taxation system was a common feature of the colonial administration in Nigeria. It was this same taxation issue that led to the 1929 Aba Women’s Riots (3).

Mr Akomolede, according to Dr Faboyede, resented the idea of paying six shillings per head. He courageously represented the interest of the people by example, as he refused to pay the six shillings. He was arrested and his arrest led to social unrest in the community. On hearing about his arrest, the people of Akure threw stones at king Deji Adesida I and the Resident, G. G. Harris inside the court (4).

The Outbreak and the End of the War

Thus the name ‘Ogun Okuta’ which means the Stone War or Missile War evolved. Okuta (stones) were thrown at these people on the podium until the police intervened in the crisis. The police stormed Akure until August, and they were able to maintain calm nature, though arresting and jailing the front fighters of the revolts.