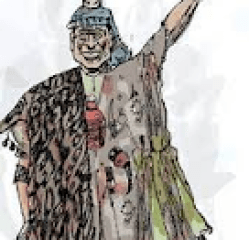 The Oyo Empire lied in the southwestern part of Nigeria, now housing the seven popular Yoruba states Osun, Oyo, Ogun, Ondo, Ekiti, Kwara, and Lagos states. The empire had two phases of history, just like many empires in Nigerian history.

Ilorin, the now capital of Kwara state, was originally a Yoruba region prior to its conquest by the Jihadists led by Mallam Alimi, when he supported Afonja, the then Are-Ona Kankafo of Oyo Empire, to wage war against the Oyo Empire.

Notably, Kwara state in contemporary Nigeria is hardly recognized as a Yoruba state because of its attachment with some elements of the Hausa emirate system of administration.

It is of course pertinent to examine the socio-political arrangement of the region in order to shed more light on the primordial system prior to the 19th century.

The System of Administration

However, his power could be checkmated by other offices through the “checks and balance practice”. The then Alafin during the era of Afonja was Aole.

The Oyomesi, headed by Basorun, was an advisory council to the Alafin. The Oyomesi could also check the excess of a despotic Alafin by sending calabash to the king, which would command him to commit suicide.

The Ogboni cult also existed in the system. This cult carried out ritual practices in the community, and could also check the excess of a Basorun who tried to steer the Oyomesi in his own ambitious manner.

The Are-Ona Kankafo was the head of the empire’s army. It was taboo for the Kankafo, and the Alafin to live (together) in Oyo. The military outpost for Oyo was Ilorin. A Kankafo would have to reside in Ilorin and obey the call of Alafin if war broke out.

A Kankafo should also commit suicide if he was defeated in a battle. Residing in Ilorin, he fought wars for the empire and notably he was a palace-born child.

Following the unfortunate revolts against the Oyo Empire, the empire fell and “Afonja was increasingly dominated by the Muslim Fulani, and, upon his assassination, Alimi’s son, Abd al-Salam (Abdul Salami), became the emir of Ilorin and pledged allegiance (c. 1829) to the Sokoto caliphate.” And subsequently, Ilorin was able to subdue many territories at her borders.

Causes of the Revolts

There were many factors that led to the grudges between the Alafin Aole and Afonja. Afonja’s relation to royalty coupled with his ambitiousness became threats to Aole’s supremacy.

Therefore, Aole sought to eliminate Afonja from the surface of the earth. He, therefore, sent him to attack a place in Ife territory, Aponmu and later Iwere-Ile and bring them under the Oyo Empire.

Since it was taboo for any Yoruba town to attack Ife (it was sacrilegious to attack Ile-Ife and communities under her), Aole sent Afonja because he wanted him dead. Afonja refused to attack these places and afterwards “he marched on Oyo, stormed the palace, and demanded that Aole should abdicate,” and finally he sent empty calabash to Alafin, which meant he should commit suicide.

The Consequences of the Revolts

One of the consequences was the fall of the Oyo Empire. Facing many revolts from Afonja and Alimi, a Jihadist, the Oyo empire fell gradually by the death of Aole, who cursed the whole Yoruba land shooting arrows to different zones of the earth and raised even curses afterwards, which later led to the cause of the Yorubas being enslaved by the race that was inferior to them (The Slave Trade).

It also led to the destruction of many territories, loss of lives and properties. Many lands ceased to exist as a result of the revolts and counter-revolts from Ilorin and Oyo respectively.

After successfully making Ilorin an independent territory, Alimi, who has been longing forward to making Ilorin an emirate under the Sokoto Caliphate, used the Fulani forces against Afonja, who later died after the battle. This later led to the inclusion of Ilorin into the Sokoto Caliphate when Abdul-Salam became the first emir of the Yoruba Ilorin.

However, it is important for history students to be meticulous while examining the fall of Oyo as a resultant effect of one Alimi, a jihadist, supporting Afonja against the Oyo Empire. But the revolts contributed to the Yoruba Civil Wars.

There are many distortions of reality in many written documents concerning this; Prof. Emeritus Ade Ajayi used oral traditions to clear this ‘added story’, the fall of the Oyo Empire has nothing to do with the 1804 Jihad as Afonja had been revolting against the Oyo Empire prior to the coming of Alimi. Therefore, Oyo mostly internally declined.