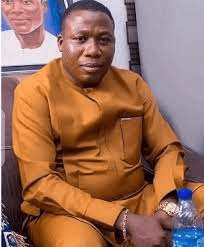 Sunday Adeniyi Adeyemo, popularly known as Sunday Igboho (born 10 October 1972) at Igboho town, located in Oke-Ogun, Oyo State (1). Tens of thousands of people have been interested in the topics covering this prominent man because of his aggressive but beneficial activism.

What brought him to the limelight was not the recent happenings where the Fulanis from the north keep maiming the peopling of the southwest in the pretext of cattle rearing. However, it is pertinent to know that issues surrounding the killings are complicated, has it is well known that there were (well-composed, calm and friendly) cattle Fulanis in the southwest region prior to this period.

As believed by millions of youth who actually know little or nothing about the man, they thought he was a killer due to several distorted stories and histories related to them. I also thought he was because I was told such kind of story as well.

This work, therefore, seeks to briefly examine the personality of Mr Adeniyi Sunday Adeyemo, known as Sunday Igboho, covering his beginning, happenings that rendered him prominence and his contemporary activities and activism.

Without further ado, Igboho is the name of his hometown in Oyo State, which means he was named according to his home town. Name in Yoruba land has a very significant impact in the life of a birthed child. Perhaps when his name, Sunday, was creating confusion (as in, which Sunday?), people then precisely called him Sunday Igboho; that is Sunday from Igboho.

The fierce war that happened between Modakeke and Ife, for the first time brought Mr. Igboho to limelight. In 1977, he took an active part during the Modakeke-Ifecommunal crisis. Igboho defended the Modakeke people and following this he relocated to Oyo and worked with Oyo governors (2).

Sunday Igboho had and still had a significant impact in Oyo governance; he had taken part in the governance, and has defended the course of human rights to the core, as he was so much respected in the Yoruba country and the world entirely because of his possession of metaphysical power: he could command gun, disappear and perform different sorts.

The distortion against Sunday Igboho should be cleared here. He is known for fighting for the rights of the people especially the Yorubas, his people. He is a man of dignity and one that truly loves his nation to the core. Mr Igboho is not a killer. He is a philanthropist, an activist, a businessman and a politician. Stories presenting him a killer were just created by his enemies in order to tarnish his image.

Following the incessant killings of the farmers in Oyo, and Southwest generally by the northern cattle Fulanis, Mr Igboho once used his metaphysical knacks and stood for what he loves to do- protecting the rights of his people.

He gave an ultimatum to the (killermen) herdsmen in Ibarapa and this practically reduced the killings as these people were chased away from the land, though there are still thousands of cattle Fulani in the Southwest.

Conclusively, the name, Sunday Igboho has generated different topics in the country, having different perspectives among different ethnicities in Nigeria. However, the Akoni Oodua, Sunday Adeyemo Adeniyi has taken immense parts in the protection of the rights of the people and he forever remains a hero!