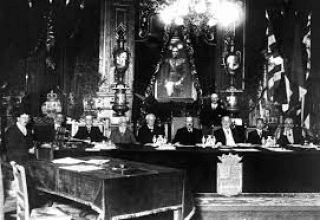 The emergence of this organization became a milestone in the course of the evolution of international system- becoming a contemporary system as from the era of the League of Nations. The LONs championed the Treaty of Versailles (1919) signed among European powers to punish Germany both economically and politically because of the latter’s aggression during the First World War. 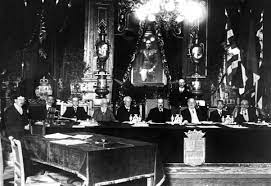 The members of the LONs were forty-three at the birth of this organization and gradually numbers kept increasing to include several polities in the world. It had different offices like the general assembly, the council of ministers, the secretariat, the International Labour Organisation, the International Court of Justice among others.

The main objectives of the LONs were to prevent another world war by advocating for open diplomacy, maintain world peace, ensure the disarmament of nations and create a podium where grudges among states could be resolved amicably. Some of these aims and objectives were achieved but unfortunately, they were short-term. However, the paradigmatic legacies of the League of Nations are one way or the other elements of contemporary international relations. The achievements and failures of the League will be examined subsequently.

One of the major achievements of the League was its prevention of war for over twenty years. The League of Nations maintained a perfect diplomatic war-free atmosphere as it averted war from 1919 to 1939. Came up different sorts of treaties like the Locarno’s treaty of 1925, furthered Lorraine’s disarmament policy, for peace maintenance. However, the outbreak of World War II in 1939 led to the extinction of the League of Nations.

The League also solved lands and political disputes among member states mostly in the 1920s. Among them were disputes between Finland and Sweden, German-Polish over Silesia, Iraqi-Turkish over Mosul oilfield among others as well as the arbitration of the League in Germany and Italy during the Corfu Crisis. The administration of colonies under the mandate system and financial aid to smaller states are also part of the achievements of the League.

Furthermore, it aided research in order to curtail the spread of diseases. The League of Nations played protagonist role in containing the spread of the1918 Influenza Pandemic, Spanish Flu. And lastly, the League also campaigned against slavery and narcotics. However, the organization began to lose its importance by the 1930s as aggressions of the member states pushed her to extinction.

The League of Nations did not have an organizational army that could militarily punish offending members of the League. Also, the United States of America, a significant power in the world did not join the League; this rendered the League incomplete with the absence of a super power. The aggressions of states like Japan (invading Manchuria), Germany (going back to rearmament), and Italy (invading Ethiopia), all these factors led to the fall of the League of Nations by the outbreak of the Second World War in 1939. However the importance of the League became legacies to the United Nations Organization (set up after World War II) as the achievements and errors of the League are also emulated and bridged respectively.