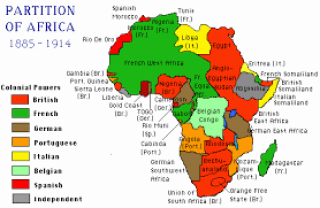 The partition of West Africa was a short event that officially took place at the Berlin Conference of 1884-85, where European powers amicably recognized their interests in West Africa, and thereby sharing the territories according to their wishes (without considering the ethnic differences of the people).

The era of the slave trade made more brutal by European slave traders has opened the eyes of Europe to natural (blessings) resources of West Africa which they coveted so much.

Championed by Otto von Bismarck of Germany, the European powers- Britain, France, Germany, Portugal, and Belgium- met in Berlin to settle their differences and amicably pursue their imperial interests in West Africa.

The urge to absolutely exploit the raw materials of West African countries like Ghana and Nigeria made Britain an active player in the scramble for and partition of West African territories.

Just like other powers, the interests to expand territories and exploit the natural resources of West Africa led these powers to the partitioning of this region.

After the Franco-Prussian War of 1870, France had been at the edge of extinction in European affairs as it was brutally defeated by Germany. Since then, France had been looking for ways to expand her territories in Africa in other to also increase the prestige of the nation.

Following some drastic events of the nineteenth century, France tried to establish protectorates in parts of West Africa. European powers reached out en mass to take up territories that were mostly strategically and economically important to their home countries.

As Germany claimed sovereignty over the coasts of Togoland, Cameroons, South West Africa, and Tanganyika; British influence grew in Egypt (which had been occupied by the British in 1882), Sierra Leone, Nigeria, Ghana, and the Gambia; France also reached out for Senegal, Mali, …….., and lastly Belgium under Leopold also longed for territory in Africa.

The Berlin Conference of 1884/85 amicably settled the race among the powers and effective occupation of West Africa was confirmed.

The British, for an instance, occupied Nigeria after paying a total amount of Naira to the company which had been making trade relations with the local people and signing of series of unclear treaties with the local chiefs, the Royal Niger Company set up by Tubman Goldie.

It also led to the loss of culture and heritage. Many cultural antiquities of the people were stolen by colonial forces after the fall of the former forces.

The conquest of the Benin kingdom in Nigeria is a typical example of this; the Benin kingdom resisted British domination and they were brutally massacred by the British forces during the Punitive Expedition or the Benin Massacre of 1897.

As from then some of the African cultural properties started to showcase in Europe and America. The repatriation of African stolen artefacts is now a topic that has gained the interest of scholars both in “Africa and the Rest.”

The abysmal consequence of the partition of West Africa is one of the unfortunate happenings that keep aggravate the course of underdevelopment in West Africa and Africa generally, shattering the heritage of the people and creating borders without considering demographic differences.