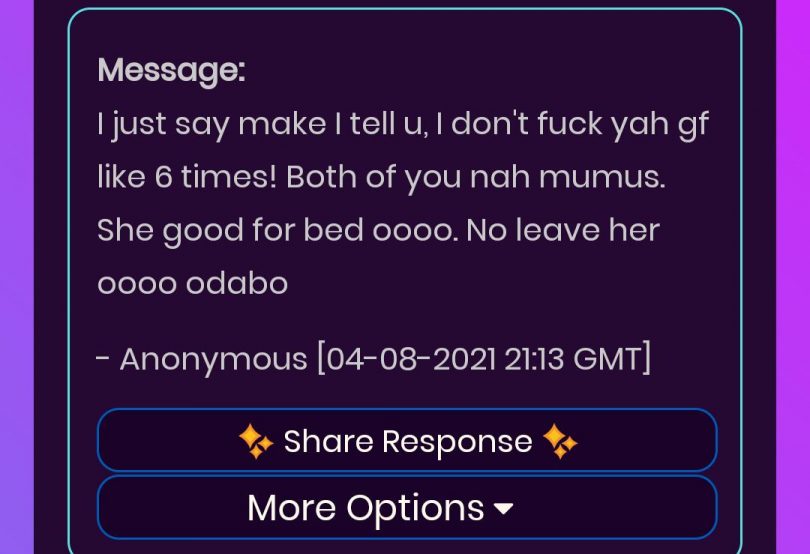 This article was written by Tadese Faforiji and Boluwatife Adedokun

This has done more harm than good in society. The havoc this has caused to the people and society, in general, is shockingly overwhelming and unpalatable. (Adedokun 2021)

An anonymous message ‘boot’ has been a tool used by social media users to reveal some obnoxious, and odious secrets and share experiences that cannot be said openly and assertively to the person involved. Became popular in 2018, this engine has had many negative impacts on our immediate environment. J

ust like the evils of WhatsApp status which ninety-nine percent of Nigerians have not yet known its importance, sharing unnecessary posts.

The very aims of the anonymous message blog, according to gdpd.com, Kubool, an interactive anonymous messaging app with a dare game, ensures your privacy so that you stay anonymous every time you send someone a secret message.

You are anonymous until you ever choose to reveal your identity. What is the goal of this web? A question that is unknown to the users. Kubool is one of the most splendid innovations to have in the digital world, but users, especially Nigerians are still misusing the platform.

The rate at which the use of anonymous messages has disclosed to the general public some unpalatable secrets that are meant to be concealed can never be underrated.

Should we say, this is a good practice when the condition or issue which is meant to be arcane between two people is being exposed under the pretext of an anonymous message?,

Certainly not, when an ex-lover exposed what has happened between him and his ex, where an aggressive or annoying friend exposes the wrong which was committed by his/her so-called friend.

This indeed is a mess and a force to be reckoned with and tackled within society. Anonymous messages have opened the buttocks of some people to a large audience and reveal their negative attitudes to society.

This indeed is a ridiculous practice and obnoxious act. However, this innovation by the web is a palatable one, but lack of orientation and right sense still make Nigerian youths keep wasting their time with this crack.

It is appalling and unreasonable that anonymous message has given room for people to exchange abusive words which cannot be exchanged physically by both parties. People abuse themselves with obnoxious and smelling words.

Lambasting someone’s personality without even knowing the abuser has become commonplace.  This has made some people talk rudely about a top official or a reputable person; insult an elderly person without knowing the insulter, and also create an atmosphere of fear.

There are some images that have been tarnished with the use of anonymous messages. Some evil-minded people intentionally denigrate people’s personalities by writing or saying absurd statements about them, because they know they cannot be confronted or punished due to the fact that “no one knows who wrote”. People say obnoxious things about fellow individuals out of wickedness to defame such a person.

This constitutes lies; lying about someone and saying what is absolutely false and bogus about them. Shall we say this unpleasant and ridiculous act constitutes good when an innocent person’s image is being denigrated and ridiculed? Saying unfavourable things to an honourable person is not genuine again.

When I look at this practice, I hardly see the good aspect of it because it is totally a time-wasting task, though made for a reasonable set of people but misused by time-wasting Nigerian youths who still find it difficult to define the right channel to their destinations.

Someone actually, innovates this practice to suit some goals as examined on the web. However, it has been misused among Nigerian youths. Notably, remember you are interacting with a Google-Ads web of significant importance in the digital world.

What are you going to give to the world, as a youth? This is the working-age, not a time-wasting era.

Causing Trouble to a Peaceful Ambience

The trouble this has caused to some homes can never be overemphasized while explaining its ills. It has collapsed some peaceful homes. Many a time some people gang up to implicate a fellow human being and write an anonymous message which contains negative action and make the partner of the person be aware, or spouse.

This indeed has made some houses to be folded compactly. An antagonist will cook up a lie and write it in form of an anonymous message to destroy some people’s happy home.

For instance, some secondary school mate might create an anonymous platform and write in it some negative things that have been done in the past or simply plan a false message and write about their classmate who is happily married and this will be sent to the husband. This is no doubt can put an end to the marriage or turn a peaceful house into a warring field.

Rather use it to express a genuine opinion to friends and family and remember to be moved by successful people all over the world. Big guns in society did not state with a time-wasting task. Unleash your potential to the world

Citation: Tadese Faforiji and Boluwatife Adedokun. An Examination of the Evils of Anonymous Mails. (August 5, 2021). Tadexprof. Retrieved from https://tadexprof.com/2021/08/an-examination-of-the-evils-of-anonymous-mails/