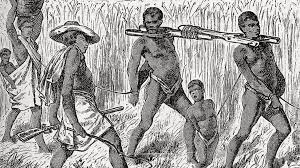 Slave trade simply is a trade where people are traded as articles of trade. The term widely gained prominence by the obnoxious trans-Atlantic slave trade in which European merchants, regulated by the force of mercantilism, met themselves purchasing humans like them from Africa to engage them in the ongoing plantations in the discovered New World- America and West Indies.

Causes of the Slave Trade

There were many factors responsible for the causes of the slave trade which lasted for over four hundred years, starting from when one Gonzalves, an explorer, visited Africa in 1441 A.D., left with twelve Africans and presented them to Prince Henry the Navigator of Portugal, as a gift from his great voyage to the black world.

Starting from then, European merchants abandoned using the weak Amerindians in the plantations and sought to get labour from the African continent.

The idea pushed forward by European writers like Charles Darwin; seeing the black race as the inferior race; the need to get stronger labourers to engage on plantation due to the frailty and breakable nature of the Amerindians.

The advice of Las Casas who suggested getting labourers from Africa (as people who could work for long hours under the hot sun), the urge to establish coastal route along the coast of Africa to Spice Islands and India,  the already practice of slavery (pawns) in Africa among others, were responsible for the causes of the trans-Atlantic slave trade.

At this juncture, the pawnship system in African society should be elucidated. In a situation whereby a debtor could not pay his debt, he would give a pawn (usually a child) to the creditor and the pawn would have to work for the debt, and later his emancipation.

After the payment of the debt, he is incorporated into the society as a normal citizen. As mostly referenced in the Niger Delta region of Nigeria, King Jaja of Opobo was (a slave) given as a pawn who later paid the debt, bought his emancipation,  and later rose to the fame of the household.

This has left lasting effects in Africa generally, resulting in calamities, disasters and has been the very basis for African underdevelopment. Actually, the impact of slaves can never be examined thoroughly in an article because some of its negative effects are yet to surface.

Impacts of the Slave Trade

One of the impacts of the slave trade is the depopulation of Africa. Over thirty to forty million Africans were carried to Europe, America and far Australia to engage them in hard work.

As slaves were being captured either by hiring or in a Gestapo style, they were then chained from one right leg to the other left leg, to prevent them from escaping. It claimed thousands of millions of population of Africa and this later led to backwardness in terms of demographic distribution, and later, overall progressiveness.

Loss of Lives and Properties

It also led to loss of lives and properties. As earlier explained, the slaves were actually treated like animals. A recalcitrant slave who did not want to get to the shore would be (drowned) pushed the sea, and the slave traders kept moving with the rest. Also, the course of getting captives was not easy, many properties were destroyed, and many people lost their lives to this.

This threw light on the manner of getting slaves; the slave traders were not solely waging war against the indigenous people, but with the help of gun-thirsting African leaders, many slaves were captured by wars, and they were later sent to the shores in Lagos, Calabar, Niger Delta region among others in that line.

Therefore if Europe has always been condemned to this ‘greatest sin against humanity,’ it should be noted that Africans themselves were involved in the obnoxious trade; it was not solely a European enterprise.

It stopped African technological development. The age-long technological advancement of African society evidenced by the prehistoric materials as excavated by Thurstan Shaw, Frank Williams, Ekpo E. among others, was put paid to, by the slave trade.

The archaeological excavations of some sites in Nigeria (by Shaw), Tanzania, South Africa, Chad, etc. shed more light on African technological progress before the contact with the Europeans who ventured into the land and shattered the established glory.

It also led to the establishment of Liberia and Sierra Leone, promoted racism, set a paradigm for endemic corruption, mismanagement of resources, black colonialism, and finally prepared the ground for colonization.

Sierra Leone was established in 1787 by British humanitarians and Liberia in 1821 by American philanthropists. These established colonies served as dumping grounds for ex-slaves from Europe, America and other places where slaves were being used prior to the industrial revolution.

As the slave trade had already prepared the ground for colonization by dictating the fate of African socio-political, economic and religious settings, Christian missionaries in the pretext of preaching against slavery, and slave traders entered the hinterland of Africa and prepared ground for the unfortunate colonization that took effect in the early twentieth century which has so far prepared the basis for African underdevelopment.

Abolition of the Slave Trade

The efforts of humanitarians like Granville Sharpe, Thomas Clarkson, William Pitt, William Wilberforce, the 1807 Abolition Act and 1833 Emancipation Act, the Mansfield Judgment of 1772, the efforts of the missionaries among others, led to the gradual abolition of the slave trade, and finally, the decisive civil war between the two Americas in 1861-65 totally led to the abolition of the slave trade.

Now international organizations like the League of Nations (1920-1939), and later United Nations Organization (1945-till date) have treaties negating unfortunate trade in humans.

(opens in a new tab)