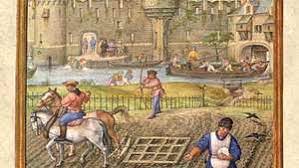 The traditional economy is the primitive economy or the pre-industrial economy. It is characterized by an excessive pre-occupation with agrarian production and simple economic activities such as hunting, gathering, and fishing. (Ogunode, 2018) Agricultural engagement is the most prevalent economic engagement in the traditional economy. Feudal economy (also, feudalism) has no universally agreed definition among the scholars, although there are some similar elements that are agreed upon in the attempts to clarify the concept and also its practices.

Feudalism is a traditional economic and socio-political arrangement of a society based on land ownership. The core of a feudal economy is land. The possession of land in a feudal society led to feudal-based social classes. Therefore, the major factor responsible for the differences in the societal classes is the differences in the acquired lands. Feudalism is a system for shaping society around relationships derived from land ownership (fiefdom or fief), in return for labour or service. The lord is the owner of the lands, who awards the lands to the nobles, vassals in return for something beneficial to the lords.

Feudal Economy in Every Society: An Overview

Feudalism flourished in Europe from the 5th century to the 15th century, when the feudal lords lost their power to a new class of economists, the mercantilists. Feudalism survived in European society for over nine centuries. 12th century England was a feudal society with her “Divine Rights of Kings.” The King, who was the absolute owner of land awarded lands to the nobles, knights and other several tenants who pay in return to the king. The king could expand the royal territories and could stop any tenants from working on the farm because he was accountable to no one except God (The Divine Rights of King).

Without considering the variant of the French feudal economy, 11th-century France was a feudal society. In terms of kinship or friendship, the feudal grant of land occurred between the lords and the vassals, and by the eleventh century, there was a further breakdown in the feudal practice, yet not a new economic system but feudalism.

The Chou monarchy, 1122 BC – 221 BC, of the Chinese international system was the overlord of lands which he awarded to the nobles, princes, knights, and other tenants, in return for military services. This is the argument that usually follows the feudal economy; the lord of the land might not prefer payment in economic value but services.

The Chou dynasty used the vassal states under the nobles to fight wars. It was the duty of the vassal states to send soldiers to the Chou in time of war. The monarch could create and extirpate new states. With the continuous threats from the Chin Empire of the Han dynasty, the Chou monarchy fell in 771 BC, and the Warring States Period later nailed the coffin of the Chinese international system of the Chou Dynasty.

It is unarguably true that Africa is the best instance of a feudal society because of the continent’s contact with the Europeans. Land, among the Yorubas in Nigeria, belonged to the king, and he had the absolute right of ownership on the land, as the first settler of the place. The king would distribute the land to the tenants who in return paid tributes (usually in form of oil, foodstuffs) to the king.

The Maori aboriginals of New Zealand who settled in this region around 1200 A.D. – 1300 A.D. engaged in hunting, gathering and farming before the 17th century when the Europeans started to intrude on them.  Also, it often claimed that feudal land tenure was introduced to this region when Britain colonized Australia.

The feudal economy in the Americas is mostly evidenced by the plantation economy of the Deep South. Especially, South America was a feudal, agricultural society. Summarily, feudalism fell and gave way to another economic arrangement, mercantilism, in the 15th century, during the era of the European Inter-state System. Therefore, all societies in the world, irrespective of their development, had passed through the feudal phase of economic arrangement.