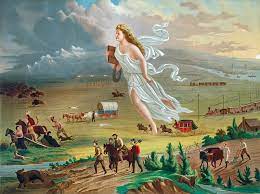 Having secured their independence from the British in 1776, the feeling of superiority and exceptional selection by ‘divine choice’ amongst the Americans gave them the unusual belief that ‘everything and all mountains’ are surmountable no matter the forces involved.

The guiding inspirational force that propelled the expansionist aspiration of the Americans later came to be known as manifest destiny.

Although the phrase manifest destiny originated in the nineteenth century, the concept behind the phrase emerged in the seventeenth century with the first European immigrants in America, English Protestants or Puritans.

Manifest destiny is defined as “the concept of AMERICAN EXCEPTIONALISM, that is, the belief that America occupies a special place among the countries of the world.”

Put more clearly, manifest destiny is a doctrine or belief that the expansion of the U.S. throughout the American continents was both justified and inevitable.

The ideology of manifest destiny continued through the eighteenth century as victorious America won independence from Great Britain, an event that many occasioned to be pre-ordained and lauded by God and an example of American ‘exceptionalism.’

John Louis O’Sullivan was the American editor who coined the phrase “manifest destiny” in 1845 to promote the annexation of Texas and the acquisition of the Oregon territory.

The use of the term “manifest destiny” gained traction and entered the conventional conversation in 1845, when journalist John Louis O’Sullivan wrote thus:

“our manifest destiny to overspread and to possess the whole of the continent which Providence has given us for the development of the great experiment of liberty and federated self-government entrusted to us.”

Nineteenth-century expansionism went hand-in-hand with the concept of manifest destiny, each signalling that there was a God-given, sanctioned right to conquer the land and displace the “uncivilized,” non-Christian peoples who, it was believed, did not take full advantage of the land which had been given to them.

This ideology served as justification for the violent displacement of native peoples and the forceful takeovers of land by military means.

Nineteenth-century Americans expanded upon Winthrop’s notion of “a city upon a hill” to encompass the idea that all countries should look to the United States as a model nation.

Just as sixteenth-century Puritans had seen it as their divine right to “tame and cultivate” the frontier, so too did nineteenth-century capitalists and politicians see the expansion of the frontier as providential, their personal and professional profit in harmony with the nation’s economic development.

Despite the discouraging difficulty in travelling to long distances in the 1700s, some daring Americans who were consumed with the wave of manifest destiny and America’s belief in the concept of exceptionalism dared the odds to pursue settlements beyond the frontier.

The search for adventure, new, rich land for farming and the simple quest for a place where they could start over a new life were some of the reasons that inspired the westward movement and put more correctly, the expansionist desire of the Americans.

Consequently, they moved west to find opportunities beyond the frontier and extending far into the Appalachian Mountains.

The first set of daring Americans that moved west came to be known as pioneers. These pioneers as they arrived inland unknown to them, learned to be self-reliant.

The movement westward was first engineered and led by hunters and trappers into areas where they had little or no useful information. One of the most famous of the pioneers was Daniel Boone who was born and raised near the edge of Pennsylvania’s wilderness.

As a young boy, Daniel loved staying around the Native Americans and this past time gave him the opportunity to learn how to hunt and trap forest animals.

This experience became very useful during the westward journey to discover, settle and take ownership of new land beyond the frontier. Frontier is where newly settled areas meet unsettled, but not necessarily uninhabited, areas.

The resilience of the pioneers paid off with the discovery of the Warrior’s Path which led them into a gap, or narrow pass, between the mountains and the first area that was discovered, was what later became known as Kentucky. The mountain pass the pioneers had used came to be called the Cumberland Gap.

The Resistance by the Native Americans

As the pioneers and settlers moved further westward, the anger of the Native Americas who felt cheated and agitated that the ancestral land was being forcefully taken over from them, resisted and mobilised against the invaders and fought a lot of battles to register their displeasure.

In older texts, terms such as Indians, American Indians and Amerindians are commonly utilized, and such terms can also be seen in the names of many laws and governmental entities, such as the U.S. Bureau of Indian Affairs and The Indian Arts and Crafts Act of 1990.”

However, they were unable to stop the constant flow of settlers or prevent the American government from passing laws that allowed people to settle on what was once Native American land.

Despite this frustration, the Native Americans still put up courageous resistance but in 1794, several Native American tribes were finally defeated at the Battle of Fallen Timbers near the present-day city of Toledo.

This defeat opened up other areas and the westward expansion assumed a new dimension as the Native Americans were either displaced permanently or absorbed depending on the disposition of the settlers and the U.S. government expansionist policy at the time.

Manifest destiny and America’s strong attachment to the concept of ‘exceptionalism’ contributed immensely to the successes recorded throughout the westward expansionist enterprise in the period under review.