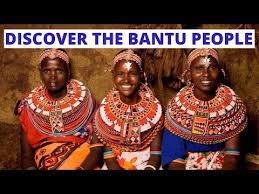 Who Are the Bantu People

The Bantu were similar groups of inhabitants who had settled in South Africa thousands of years ago. The Bantus included the Sotho, Ovambo, and the Nguni, who settled on the eastern coast of South Africa, chasing away the Khoisan, the first two inhabitants of the region.

They were the third group of settlers in South Africa. The Bantus were believed to have originated from West Africa and spread to the south over several thousands of years (1).

The Bantus had some superior features in comparison with the Khoisan. In all endeavours, the Bantus were more developed and civilised than the Khoisan.

The Bantu people were more politically, socio-culturally, religiously, and economically ordered and organised. In other words, their dispositions were recognised, structured and practised unlike the Bushmen and the Hottentots. These features of the Bantus brought about the reference, ‘as first among equals.’

Firstly, the Bantus were not of short stature like the Khoikhoi. They were huge, tall and able-bodied. In many academic materials, the Bantus are often regarded as Negro stock “who originated around somewhere in West Africa (2).” Unlike any other group in South Africa, the Bantus engaged in many activities in terms of socio-political and economic dispositions, without having one disturbing the practice of another.

Also, the Bantus practised a mixed economy, unlike the Khoisan. The Khoisan had been recognised with hunting and gathering lifestyles, but the Bantus practised the combination of both, inclusive of other agro-allied activities and animal husbandry. They cultivated lands for agricultural use, and also, kept cattle.

Land was a significant factor of production in their economy. All engagements revolved around land, and the chief held the land in trust for his community’s or tribe’s members. Though there were no defined boundaries, each of these tribes had its own area of land which could be used for agricultural practice, and other relevant necessities.

The roles of cattle in the social, economic and religious life of the people cannot be underestimated. Cattle served as the basic determination of social status, a major prerequisite of marriage and as animals for sacrifices to their gods in times of calamity, rituals, or payment of fines. Both the Nguni and the Sotho Bantu groups had these features in common, they both prioritized cattle as the number one necessity in their socio-economic, and religious dealings.

Furthermore, the Bantus had a stated and well-practised system of administration and succession. Though polygamy was their popular culture, the wives shared the same rights, irrespective of who was married first or last, and also, the same things applicable to their sons when it came to succession questions.

The last wife did not only have the same rights as the first wife but also, her child was often regarded as an undisputed heir to the throne (3). A situation whereby a regent was not ready to return the throne to the king when it came of age usually resulted in a severe war of succession.

Moreover, in the religious organisation, the Bantus were also organised. Not only that the chief possessed political authority, but also religious authority.

The chief was seen as the intermediary between the ancestors and the living. He presided over many ritual and spiritual issues, especially in terms of detecting people with wild spirits, and also, summoning rain with his magical performance.

Unlike the Hottentots and the San who had unclear religious practices, the Bantus had high reverence for their deities (the spirit) through the chief. On many occasions, harvesting was abandoned until it was authorized by the chief.

An outbreak of diseases was believed to have been the handiwork of the sorcerers who had allied with the evil spirit. Detecting sorcerers was a popular culture of the Bantu people. If anyone was detected or alleged, such a person would be given poison (mravi) to drink.

If he survived it, that meant he was innocent, and if he did not, he was believed to be a sorcerer. In the witch detection ceremonies, usually conducted, many people lost their lives. And the executed would have his land confiscated by the chief.

In conclusion, the Bantu people were different from the San (the Bushmen), and the Khoikhoi (Hottentots) because they were more organised than the Khoisan. They practised mixed economy, emphasized the significance of cattle in all dispositions, had organised political system with a defined framework for succession, and others, which made them ‘first among equals.’

Cite as: Faforiji Tadese. The Bantu as First among Equals. October 26, 2021. Tadexprof. Retrieved at https://tadexprof.com/2021/10/the-bantu-as-first-among-equals/