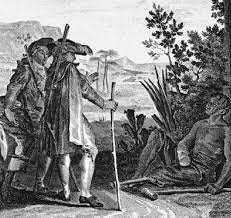 The United State of America is often attached to significant topographical features of the Atlantic Ocean on the east coast and the Pacific Ocean in the west. Christopher Columbus (c. 1451-1506), an Italian explorer, discovered America in 1492.

The discovery of this region was primarily because of the region’s natural potential (gold and silvers), and also, to spread Christianity. This exchange is usually referred to as the Columbian exchange. (Pre-colonial America)

The first exchange that took place between the Native Americans and the Europeans was the exchange of diseases. The presence of the Europeans led to the spread of the Old World diseases in the new world.

The diseases like chickenpox measles, mumps and smallpox claimed 90/ of the Native American population. And on the other hand, syphilis, a lethal sexually transmitted disease from the new world also spread to Europe.

The indigenous population declined over the 17th-century Spanish epidemics. The Spanish explorers were exploring the southern part for gold and silver, and a military post was established at San Augustin. The Catholic missionaries were trying to convert, just like the French Jesuit missionaries were converting them in the French colonies.

Also, there was an interchange of subcultures, like language. As the trade between the Ameri-Indians and the French traders became intense, the French learned their local language, the Native American

s jostle for middleman position in the trade. The French traders exchange textiles, weapons and metal goods for the furs of animals (of beavers, bears and wolves). The New World became a stage for cultural interaction and a melting pot of diverse people and cultures.

There was also the introduction of the Old World animals to the Americas. Pig, cows, chickens and horses from Europe were introduced to the Americas, who later made use of them in their activities especially, their major economic engagement, hunting.

In 1493, Christopher Columbus, while facilitating the introduction of New World commodities like sugar, tobacco, chocolate and potatoes to the Old World, introduced horses, cows, pigs, and chickens to the Americas. This transformed the economy of the Native Americans. They started to make use of horses for hunting.

On the other hand, tobacco, which was not in Europe, was introduced to the Europeans in America. Although, there was no importation of tobacco in larger quantity into Europe until the 1590s it became the first global commodity.

The Europeans also started the habit of smoking, and also, discovered the medicinal importance of tobacco afterwards. And also, the Europeans supplied alcohol to the Native Americans.

The ready market for animal skins in Europe led to intensified hunts for deer in the New World. The Indians swap deer skins for metal knives, posts utensils, jewellery, guns and ammunition. Notably, the trade also encouraged wars because there was a ready market for was captives who were used as slaves in the Caribbean for plantations.

Therefore, the primary aim of killing animals for food became secondary; they rather hunted to obtain deerskins for the foreign market (as well as slaves). Over 5 million deerskins shipped from 1698-the 1750s from Virginia, South Carolina / French Louisiana. In fact, by the 1800s, games became scarcer.

Moreover, there was the development of monoculture (agricultural) practice. The practice of planting only a single crop per field was introduced to the Americas by the Europeans.

This was the pattern the Europeans used in the plantations of corn and other foodstuffs, and other cash crops like tobacco, rice and indigo, around the Chesapeake Bay and Carolina Low County respectively.

The Europeans commoditised trees because it was important to the shipbuilding industry for making barrel staves. And in the monoculture, the Europeans adopted Indian agricultural techniques for clearing fields. And, land, including its resources, was transformed into valuable commodities.

Cite as: Faforiji Tadese. The Columbian Exchange: the Native Americans and the Europeans. October 16, 2021. Tadexprof. Retrieved at https://tadexprof.com/2021/10/the-columbian-exchange-the-native-american-and-the-europeans/