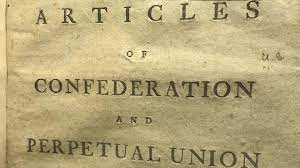 The declaration of independence on the 4th of July, 1776 marked the beginning of a new nation. However, the Treaty of Paris left the United States independent and at peace but with an unsettled governmental structure.

The first task of the leaders was, therefore, the development of Federal institutions. To start with, there was the need to have a binding constitution, this came in the form of the Articles of Confederation.

The Articles were created by the chosen representatives of the states in the Second Continental Congress out of the perceived need to have a plan of the confederacy for securing the freedom, sovereignty and independence of the United States.

The Second Continental Congress had drawn up these Articles on the 15th November 1777 to regularise its own status. These described a permanent confederation but granted to the Congress the only federal institution, little power to finance itself or to ensure that its resolutions were enforced.

The Articles ratification proposed in 1777 was completed in 1781 and legally united what were originally several sovereign and independent states, allied under the Articles of Association into a new sovereign federation styled the United States of America.

Under the Articles and the succeeding Constitution, the states retained sovereignty over all governmental functions not specifically relinquished to the central government.

Though called a confederation, the terminology of the day makes this synonymous with what today is understood as a federal government, a usage similar to that of the Canadian and Swiss Confederacy.

The last draft of the Articles was written in the summer of 1777 and adopted by the Second Continental Congress on 15th November 1777 in Yoke Pennsylvania after a year of debate.

In practice, the final draft of the article served as the de-facto system of government used by the Congress (the United States in Congress assembled) until it became the de-jure by the final ratification on the 1st of March 1781 at which point the congress became the congress of the confederation. The articles set the rules for operations of the United State confederation.

Criticisms against the Articles

The Confederation was capable of making war, negotiating diplomatic agreements and resolving issues regarding the western territories.

An important element of the Articles was that Article XIII (13) stipulated that “their provisions shall be invariably observed by every state and the union shall be perpetual.”

Although the Articles of Confederation served a crucial role in the victory recorded during the American Revolutionary War, a group of reformers known as federalists felt that the Articles lacked the necessary provisions for a sufficiently effective government. `

Fundamentally, a Federation was to replace the Confederation. The key criticism by these Federalists who favoured a more powerful central state was that the government (i.e. the Congress of the confederation) lacked taxing authority because it had to request funds from the States.

Another criticism of the Articles was that they did not strike the right balance between large and small states in the legislative decision-making process due to its“one state, one vote plank”.

The larger states were expected to contribute more but had only one vote. Moreover, the Articles of Confederation were weak and did not give a strong political or economic base for the newly formed nation. However, the Articles did serve as the lead up to the much stronger and agreed upon constitution.

The apparent inability of the Congress to redeem the public obligations (debts) incurred during the war or to become a forum for productive cooperation among the states, to encourage commerce and economic development only aggravate a gloomy situation.

These dreams of economic booms which was sure to follow the war vanished in the economic depression that followed the war.

Others-in-Council closed the ports of the British-West Indies to all staple products which were not carried in British ships. France and Spain established similar policies. Simultaneously, new manufacturers were stifled by British products which were suddenly filling American ports.

Political unrest in several states and efforts by debtors to use popular government to erase their debts increased the anxiety of the political and economic elites which handled the revolution.

The continental congress had issued bills of credit but by the end of the war its paper money had so far depreciated that it seized to pass as currency, spawning the expression “not worth a continental.”

Congress could not levy taxes and could not make requisition upon the states. Less than a million and a half dollars came into the treasure between 1781 and 1784, although the governance had been asked for two million in 1783 alone.

The Continental Congress lacked the power to impose navigation laws on the states. When John Adams went to London in 1785 as its first representative of the United States, he found it impossible to secure a treaty for unrestricted commerce.

Demands for favours and there was no assurance that individual states would agree to a treaty. Adams stated it was necessary for the states to confer the power of passing navigation laws to congress or that the states themselves passed retaliatory acts against Great Britain.

Congress had already requested and failed to get power over navigation laws. Meanwhile, each state acted individually to Great Britain to little effect.

When other New England states closed their ports to British shipping, Connecticut hastened to profit by opening its ports. Congress was able to protect manufacturing and shipping, states legislature were unable to unwilling to resist attacks upon private contracts and public credits.

Land speculators expected no rise in value when the government could not defend its borders nor protect its frontier population.

Nevertheless, even though historians generally agreed that the articles were a spectacular failure in terms of workable governance, they do give credits to the Land Ordinance of 1785, and North West Ordinance that set up a protocol for the admission of new states, the division of lands into homesteads and states, as well as, setting aside land in each township for public use.

This system represented a sharp break from imperial colonization as in Europe and provided the basis for the rest of American continental expansion throughout the 19th century.

Alexandra Hamilton, a revolutionary war veteran who determined while serving as Washington’s general Aide-de-Camp, a strong central government was necessary to avoid frustrations endured by the army due to an ineffectual Congress, called for what could be referred to as the Annapolis Convention to determine the visibility of at least revisiting the articles for their replacement.