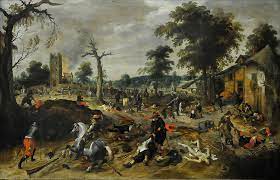 Primary in central Europe during the 17th century, religious wars that lasted for thirty years, 1618-1648 plunged this region. The major cause of this conflict was the constant disagreement between Roman Catholicism and the Protestants (both of which comprised the Holy Roman Empire), who wanted to break away from the religious sovereign of Roman Catholicism and establish their own forms of religion. Over 8 million casualties resulted from the military battles, notably; many lost their lives to famine, diseases and other skirmishes.

As the war was ongoing, it started to lose religious basis, and it was solely about a fight for dominance among the rival groups. In the end, the war had long-lasting impacts in Europe with the birth of new nation-states in society.

Causes of the Thirty Years’ War

The immediate cause of the war was the killing of Emperor Ferdinand II of the Roman Empire in 1629.

When Ferdinand became the emperor of the Holy Roman Empire, all his actions were to force the citizens of the empire to take to the teachings of Roman Catholicism. This was against the Peace of Augsburg that had already granted religious freedom in Europe since 1555.

By the Peace of Augsburg in 1555, the counter-Reformation became unlawful and citizens of the empire could either adopt the Protestants Lutheranism/Calvinism or Catholicism in their respective location.

However, religious tensions plagued the Holy Roman Empire for tens of years with long line to ceasefires and breaks. Among the catastrophic wars were the Cologne War (1583-1588) and the War of the Julich Succession (1609), and the Thirty Years’ War (1618-1648)

Even though the Holy Roman Empire had more political significance in terms of its control of much of Europe, these states were a bit autonomous. The Holy Roman Empire still claimed supranational sovereignty over both the political and religious arrangements of the states. But in reality, there was limited authority for the House of Habsburg to control the states or fiefdoms’ governance.

At Prague Castle in 1618, the Bohemian nobility (now in Austria) including the nobles of the Czech Republic rejected the reforms and decree of Ferdinand II which tried by throwing his representatives out of a window.

The Defenestration of Prague (fenestration means the windows or similar openings in a building) began the revolt in the Bohemian states with the support of Sweden, and Denmark, Norway, thus the very start of the Thirty Years’ War.

In a counter-response to the actions of Ferdinand II which tried to make Roman Catholicism the only religion acceptable in Europe, the Protestants in Bohemian states of the empire revolted and attempted to lose union with the empire.

The so-called Bohemian Revolt marked the start of the Thirty Years’ War and thus, its first phase. Fighting the battle for over four years, these nobility formed alliances with the Protestant Union states (now Germany), and also, the Roman Catholic emperor, Ferdinand II sought the support of King Phillip IV of Spain.

Not too long, troops from both sides got engaged in military combat on several fronts in Austria, and other places including the east of Transylvania. The Turkish soldiers fought alongside the Bohemians in return for economic value (yearly dues paid to the sultanate government) against the Habsburgs’ Poles.

To the west, the Spanish army formed the Catholic League; this league consisted of Roman Catholic states in now Germany, Belgium and France, who all fought on the side of the Roman Catholic emperor, Ferdinand II. Ferdinand II’s forces in some places like the east and in northern Austria, won significant battles and the Protestant Union were dissolved.

Unfortunately for them, in the west, Denmark-Norway’s King Christian IV sought to expand the territory of Denmark in the course of the war fought on the side of Protestant states.

Denmark-Norway’s armies became misfortune in the war; it was beaten back by the forces of Ferdinand II and even ceded much of northern Europe to the emperor with a humiliating treaty signed in 1629.

The Notion of Raison D’état

The notion of Raison D’état was more emphasized during the war. This was a concept that determined the reactions of European powers to one another based on national interest, Raison D’état.

Gustavus Adolphus was the leader of Sweden during this period. Sweden took an active role in support of the Protestant Union in 1630 that much of the ceded territories to the Holy Roman Empire were recovered, and the Catholic forces were pushed back out of the occupied territories.

Unfortunately, Adolphus was killed in 1632 at the Battle of Lutzen, therefore, the Swedes started to lose back some of their resolves, and they became vulnerable to attacks from the Roman Catholic forces.

To nail the existence of the involvement of Sweden in the battle, about  50, 000 soldiers were provided to Ferdinand II by von Wallenstein, a nobleman from Bohemia, in return for a grant of freedom to exploit any conquered territory, the Swedes were heavily defeated in 1635.

The Peace of Prague was the immediate result of the war.  Although the peace treaty safeguarded the territories of Lutheran/Calvinist rulers of northeastern Germany, yet it was not an exclusive treaty because Protestant territories of the south and west (now Austria and Czech Republic) were not protected. Battles continued and tension became commonplace.

With the principles of the Peace of Prague, the French, though with the Catholic faith, were rivals of the Habsburgs. France also sent troops to fight the battle against the forces of Ferdinand II in 1635 but secured insignificant achievement even after Ferdinand II died in 1637.

Therefore, there was brutal fight between two Roman Catholic states; Spain and France. Spain who had been a supporter of the Roman Catholic faith and also a fighter for the emperor’s successor, Ferdinand III, embarked on aggressive campaigns against France and threatened Paris in 1636.

For several years, after the French successfully recovered, the fighting between the forces; the Protestant-alliance of France and the Spanish forces and the Holy Roman Empire stood still.

Revolt at home weakened the military campaigns of the Spanish troops in 1640, and also, the Swedes revived and re-entered the battle. This further weakened the Habsburg forces and they started to suffer severe attacks from the Protestant alliance.

A Shift in the Thirty Years’ War

In 1643, Denmark-Norway re-entered the war, this time, on the side of the Holy Roman Empire. This year “was pivotal in the decades-long conflict.” During this time, Louis XIII of France died and there was a leadership vacuum in Paris because the position was left to Louis XIV, his five-year-old son.

The Habsburg forces of the Holy Roman Empire repelled the French and the Swedes in 1647 from Austria.

Finally, in 1648, the Prague Castle was captured by the Swedes by the forces of the Holy Roman Empire. Many works of art were looted, but the whole city was not occupied. During the period, the Austrian territories were under the control of the Habsburgs

In 1648, different parties that fought the war signed several treaties known as the Peace of Westphalia, which totally ended the Thirty Years’ War with significant new development in Europe especially in terms of geographical effects (its advocate for the concept of sovereignty and self-determination).

Among the terms of the agreement that are generally regarded as Peace of Westphalia are the concept of sovereignty, freedom of religion, the principle of self-determination and others.

It renounced the presence of any supranational body like the papacy above the state, that state had the power to administer its internal affairs without any external control.

This gave birth to a new state system that advocated for the balance of power system. And more importantly, there was freedom of religion. This term confirmed the validity of the Augsburg treaty of 1555.

Notably, the balance of power system established by the Peace of Westphalia was valid until it was shattered by the Napoleonic Wars of 1792-1799.