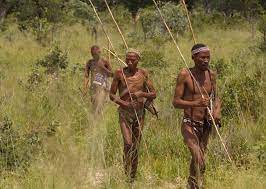 Apart from the African groups that were already present in Southern Africa by 1800, there was also a considerable European presence in this part of the African continent.

Although restricted mainly to the Cape and its environs before the 19th Century, they also played a significant role in the evolution of Southern Africa. At least, they not only added to the number of the multifarious groups already in existence, but their presence made the occupation of the region a multi-racial affair. They also added to the complexity of intergroup relations within the region.

The whites in South Africa are a product of a historical process that started in 1652 when the Dutch began to settle at the Cape. Dutch settlement in this part of Africa was sequel to the internationalization of the Southern Africa territorial waters as a gateway to Indian commerce by the Portuguese.

The Portuguese were joined by other European nations in the trade with India. The Dutch, a seafaring people happened to have been engaged in this expansion of commerce to India.

It is, therefore, not surprising that the first settlers in the Cape of Good Hope were under the sponsorship of the Dutch East Indian Company, which established the base as a stop-over station in the course of their trade with the East.

Between 1652 and 1800, various European nationalities arrived and settled in South Africa as a result of diverse aims. The French Huguenots, with the consent of the Dutch East Indian Company, came into South Africa in the seventeenth century.

Their movement to South Africa was necessitated by their religious persecution in France. By 1795, the British presence in the area had become a reality and before the end of the first decade of the 19th century, the ownership of the Cape had passed into their hands.

The Germans and the Swedish were too much later followed the footsteps of other Europeans in settling down at the southernmost part of the African continent.

Although most of the whites started out as farmers who cultivated vegetables, wheat and vine, some of them soon changed over to cattle keeping because of the high profits derivable from it. With time, the cattle-keeping group became semi-nomads as they had to occasionally move in search of greener pastures for grazing.

Also, the increase in the number of livestock keepers coupled with the search for new land further resulted in migrations into the hinterlands. It was this search for new pastures that earned them the appellation– Trek Boers.

By 1800, most of the Trek Boers had moved into the hinterland, almost living like hermits, seldom communicating with the outside world, but occupying a large gracing expanse of land.

Indeed, they had moved far north to the boundary of the Great Fish River. As individualists who did not want to fall under the sway of any governmental control, they tried to isolate themselves as much as possible by going far into the unknown areas.

Moreover, at the close of the 18th century, the Dutch company’s influence at the Cape had dwindled significantly to give way to the British occupation of the territory.

Since the various groups co-existed within the same region and had contact with each other, there was a considerable degree of inter-group and inter-race relations amongst the different inhabitants. These relationships which cut across economic, social and all other facets of life had their peaceful as well as turbulent moments.

First, amongst the Africans, there was considerable interaction between the different groups before 1800. They had peaceful relations as was epitomized in the inter-marriages between the groups and the trade relations that existed between them.

There were, however, moments of hostility and conflicts due to cattle raids, and infringement into one another’s territorial space. In times of hostility, the Bantu with their knowledge of ironworking, coupled with their numerical strength and better political organization, often had the upper hand.

It must be noted that there were also intra-group conflicts which as already mentioned above often led to migrations. The victims of hostilities between the African groups were often the San and then the Khoikhoi.

However, their marginalization was not always without stiff resistance. Thus, the Bantu remained the dominant group before the advent of the Europeans. Even after the coming of European settlers, they had little contact with the Bantu and so both groups continued to bask in their mastery of the various areas they occupied. The clash between them was, therefore, imminent as they expanded towards each other.

In looking at race relations between Africans and Europeans in Southern Africa between 1652 and 1800, it must be reiterated that for most of the time, the white immigrants interacted mainly with the Khoikhoi and to a limited extent the San, and Xhosa group of Bantu migrants pushing southwards.

This limited interaction with the Bantu and the San was because European activities were initially limited to the Cape Colony.

By 1800, the Cape Colony comprised about 20,000 European settlers, 15,000 Hottentots and 25,000 African slaves imported into the region during the Atlantic Slave trade era. Among the Khoikhoi or Hottentots, a process of detribalization had begun with many taking to European ways of life.

A lot of inter-marriages took place between them and the European settlers. This resulted in the emergence of the mulattoes, which has been noted earlier, were referred to as coloureds.

The Europeans imported the African slaves, whom they used as labourers on their farms. These slaves were at the bottom of the social ladder and suffered all sorts of disabilities.

Although the Europeans were of various nationalities-French, Swedish, English and Portuguese; the vast majority of them were of Dutch origin who easily absorbed the remaining European minorities.

Hitherto, the Dutch East Indian Company had not only encouraged the fusion of Europeans but the domination of the Dutch. It was insisted that Dutch was the original and official language of the Colony. As a result, by the time of the British takeover, the Dutch culture and language was prominent.

However, due to the local influences of other languages on the Dutch language, a separate language different from that spoken in the Netherlands evolved. This was the Afrikaan language.

This Afrikaner consciousness acted as a centripetal force amongst the European settlers; especially when dealing with the African groups.

Beyond the Cape Province were the various Bantu groups who had clashed several times with the Trek Boers in the Kaffir wars of 1779 and 1789 over conflicting land interests. The future promised more conflicts and this did not come to an end until the British crushed the Bantu much later in the 19th century.

The Rise of Apartheid Policies

The point must be emphasized that even with the subjugation of the African peoples within and around the Cape, it still remained clear that by 1800, the European settlers were outnumbered by the Africans.

This numerical superiority of the non-whites became a threat to them and promoted unity amongst the Europeans. It also explains the laws and policies that were geared towards subjugating the non-whites and the rise of racial or apartheid policies.

Thus, by 1800, the European colonists referred to themselves as Afrikaners. Afrikaner consciousness had, therefore, emerged by the time the British took over the administration of the Cape. This self-consciousness became an important factor not only in dealing with Africans but that which Britain had to contend with in her administration in Southern Africa.

The common outlook of the Afrikaners is best reflected in their attitude towards the non-whites in the colony. To them, the black race was inferior to the white race because, in their view, Africans contributed nothing to world civilization.

This attitude was strengthened by their brand of the Christian religion. There were about eight Christian congregations by 1800. Six of them belonged to the Dutch Reform Church, one to the Lutheran church and the last to the Monrovian Church. From the above, the predominant ecclesiastical establishment was the Dutch Reform Church, which had a lot of influence on the Boers.

The Dutch Reform Church was as aggressive as the Boer farmers who moved farther and farther away into the interior. The church inculcated in the Boer farmers the Calvinist doctrine and a fundamentalist religious outlook. It taught them to interpret every word in the Bible literally as the divine truth.

Through this doctrine, it inculcated into them the belief that the Negro people were the cursed descendants of Ham; while they, that is, Europeans represented the master race.

It is from this religious perspective that racism in Southern Africa derived its moral justification for Apartheid. The subjugation of the black to the white race was, therefore, in their religious thinking a divine will.

The Calvinist religious doctrine also gave to the Boers self-confidence and a sense of mission. For, they believed that they were ordained instruments for civilizing the world around them. This belief was perpetuated and spread through church sermons and education. Worst still, their relative physical isolation, particularly the Trek Boers — that were secluded from civilization –tended to reinforce their outlook of themselves and the world.

In conclusion, the picture of the South African region that emerges at the end of the eighteenth century is that of a place that saw a series of intra and inter-continental migrations, resulting in the displacement of various groups and the dispossession of territories as they exchanged hands from one group to another.

Amongst the groups, considerable inter-group relations took place and they became more and more dependent on each other. This interaction produced cordial as well as anxious and tension soaked moments.

It was obvious that the foundations were being laid for eventual racial conflicts that have come to characterize the history of the region. All that it needed to ignite the erupting volcano was the clash of interests between the Afrikaners with their Calvinist religious doctrine and the Bantu in the hinterland who were the dominant African group.

This erupted mainly in the 19th century and the aftermath of the eruption still persists up till the present day.