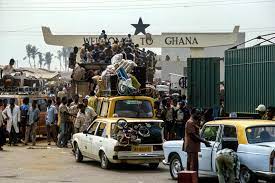 Ghana Must Go was a common name given to the deportation of illegal migrants, most of who are Ghanaians, from Nigeria following a presidential executive order in 1983.

In January 1983, Shehu Shagari, who was the President of Nigeria during this period, issued an executive order mandating illegal immigrants without proper immigration documents to evacuate the country or they would be legally arrested.

The order was said to be an alleged response to the religious issues that had ensued in parts of the country in 1980 and 1981. The majority of the immigrants were West Africans, but most of them were Ghanaians.

It is roughly estimated that over 1 million Ghanaians and other West Africans were among the deported people of over 2 million men, women and children who were seriously affected.

They had been attracted to Nigeria because of the oil boom of the 1970s, but by 1983, there was little economic progress and it was an election year. In West Africa, Expulsions of immigrants have occurred many times, for diverse reasons; deportations of Nigerians from Ghana in 1954, from Côte d’Ivoire of Togolese, Dahomeyans and Nigerians in 1958, and of aliens (mostly Nigerians) from Ghana in 1969 (1).

The main route to Ghana was westwards, passing through Benin and Togo. An attempted coup in the previous year made Jerry Rawlings, the President of Ghana, to close the mainland crossing with Togo, and to prevent a sudden influx of returnees, Togo then also shut its borders with Benin (2).

Therefore, the migrants were restricted once they reached Benin, and they were compelled to remain in the port of Cotonou, the country’s seat of government, finding means to find a boat to Ghana. Being stranded for more than a week, Ghana reopened its borders, and also this caused Togo to do the same to allow the Ghanaians to return home

Significantly, a particular type of cheap, ordinary bag of no-name in blue and red design gained popularity because it was this kind of bag that the deported used to pack their loads. This bag till today is referred to as ‘Ghana Must Go.’  In Ghana, this bag is simply referred to as ‘Ghanaian bag’, having a historic attachment to the deportation story.

These bags, according to many propositions, had always been popular: “they were big and spacious and sturdy enough for long-haul travel”. But the name ‘Ghana Must Go’ was swiftly attached to the bag to send the message of deportation to these people. They represent a period of despair that many Ghanaians would rather forget

Worldwide, according to Wikipedia, the bag has a variety of other names associating it with migrants. In Germany it is called the “Türkenkoffer” (Turkish suitcase), in the USA, the “Chinatown tote”, in Guyana, the “Guyanese Samsonite”, and in various other places, the “Refugee Bag” (3)

Ghana Must Go: 1983 Presidential Executive Order and Deportation of Illegal Migrants from Nigeria