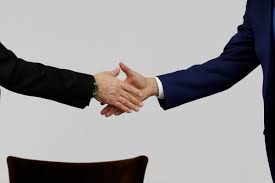 The history of diplomacy demonstrates change and continuity from its early beginning to 1815. As states began to evolve in Europe at the end of the Middle Ages, the present structure of diplomatic practise began to take shape from this early nursery bed.

It is believed that the beginning of diplomacy occurred when the first human societies began to dialogue over issues and messages were better than conflict and show strength.

Although it might be difficult to discuss the nature of early diplomacy, there are however data to make intelligent reconstruction on its early practices from epigraphic sources. It is clear that diplomatic exchanges were quite frequent, that they led to what were evidently known as treaties.

Knowledge of the diplomacy of early societies depends on sparse evidence. Traces of Egyptian diplomacy in the 14th century BC. The most consistent evidence of early diplomacy, however, has been found among eastern Mediterranean peoples. Record of treaties between Mesopotamian city-states date from 2850 BC.

The Babylonian language (Akkadian) became the first diplomatic language serving as the international tongue of the Middle East until it was replaced by Aramaic.

There is much evidence of Assyrian diplomacy in the 7th century, and of the relations of Jewish tribes, found chiefly in the Bible, within themselves, and with others. But the traditions leading to the present practice of diplomacy is credited to Greece.

This is not to mean that Africa did not practice diplomacy before the Greeks, because if Africa is the cradle of man’s origin according to scientific evolutionary theory, it follows, therefore, that first human societies are to be found in Africa.

This opinion is backed by the comments of Hamilton and Langhorne that the beginning of diplomacy occurred when the first human societies decide that it was better to hear a message than to eat the messenger.

If that has been agreed then there have to be rules which assure the safety of the messenger, and if they are rules, there has to be some sanctions for them.

Be that as it may, Greece is intellectually accepted as the state that properly laid the foundation of contemporary diplomacy, because of the copious evidence available to construct and reconstruct the long history of diplomatic practice.