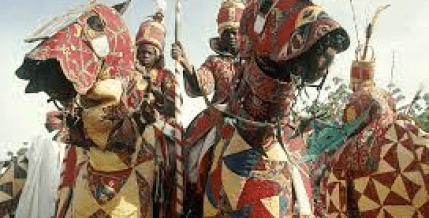 It is important to briefly examine the oral tradition of the Hausas and other records and documentation on state evolvement.

Bayajjida, a prince from Bagdad, according to their oral tradition, migrated into Hausa land passing through Borno. He got to Daura (under Queen Daura) and helped the settlers of this place to kill a threatening snake that disturbed them from fetching water in a well (except on Fridays).

After being able to kill the snake that had been a major threat to the populace, Queen Daura (amazed by his ingenuity) married Bayajjida and later gave birth to a child, Bawo, which later gave birth to another six children that formed the modern Hausa states: Kano, Katsina, (Rano, Gobir, Daura, Biram, and Zaria).

Bayajjida married a slave of Queen Daura which later also gave birth to another seven children and they were often regarded as bastard Hausa, Bansa-Bakwa while the children of Daura were original children, Bakwa.

The Implication of the Tradition

The implication of the tradition was that it was just an unscientific way of explaining the real states’ evolution and “similarities in culture.”

Also, the story was of Hamitic stuff seeing the glory of the evolution of states in Hausa land as a sole influence of a prince from Bagdad; the marriage between Bayajjida and Daura depicted a change of institution from a matrilineal to a patrilineal pattern of power ascension.

Lastly, it is also a replica story in biblical oral tradition when Abraham married Sarah and Sarah’s slave whose children were original and bastard respectively. It is a basic methodological approach to the examination of state formation in Hausa land [by linking the tradition with (biblical) European oral tradition].

State evolved in Hausa out of mere agricultural settlement known as hamlet. The centre of focus in this hamlet was agricultural practices, as each household was responsible for its economy and the kinship relationship offered in terms of group labour existed (just like the work team ‘Dowkpe ‘of Dahomey).

However, the concept of the centrality of power lost its ground during this period, the major motive of each household was the expansion of its ‘economy’ not state. In a bid to increase production, many hamlets of the same lineage joined together to foster rapid production.

The joining together of hamlets having the same lineage link led to the evolvement of Gwari (town), which was a bit developed in comparison with the hamlet. There evolved the Sarkin institution still of kinship stuff overseeing the affairs of each Gwari in terms of economy and execution of rituals to appease the gods in order to encourage massive production.

The existence of Durbi in Katsina evidenced the ritual, animistic practices in Hausa land prior to the Jihad of 1804 which made Islam the religion of the state.

And lastly, due to persistent wars of conquest among the Gwari, each Gwari started making alliances with different hamlets for the building of bulwarks to serve as protection against external attacks from other Gwari.

The establishment of the norm of building walled cities led to the evolvement of Birni, a city-state with all features of statehood including defined territory.

The Sarkins did not centrally occupy the position of authority and there was no central authority until the coming of the Wangara traders from the Songhai empire during the last half of the fifteenth century.

The Wangara (Muslims, traders, from the Songhay Empire) traders subdued the kinship ‘Sarkinship’ institution because of their experience in a well-organized state (the Songhai Empire), their economic strength as flourishing traders, and military capability.

Mohammed Korau of Wangara origin became the first king of Katsina, just like other Hausa states already under the kinship institution like Yauri, Zaria, Kano among others were replaced by kings (of Wangara origin).

However, the indigenous chiefs still held to their animistic practices and they became a major threat to the new political setting until both kings and kins finally evolved a dual institutional superstructure- contrapuntal paramountcy- having positions and roles for both the kings and the priest chiefs.

Conclusively, following the formation of states in this region, the Wangara traders from the Songhai Empire consolidated the created city-states and Islam, the military prowess of their leaders, expansionist policies among others became the major factors for the expansion of the state.