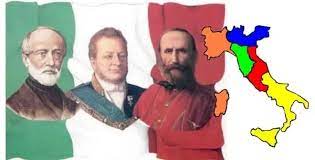 The early 19th century was marked by two movements of the utmost importance, both arising from the French revolution and the Napoleonic wars, the ideal of nationalism and liberalism which was a major foundation for the rise of the two major European states in the late 19th century (Germany and Italy) in 1861 and 1871 respectively.

During the late 18th century, intellectual changes began to dismantle traditional values and institutions. Liberal ideas from France and Britain spread rapidly, and from 1789 French revolution became the genesis of ‘liberal Italians’. A series of political and military events resulted in the unified kingdom of Italy in 1861.

First and foremost, for many centuries Italy had been nothing more than a geographical expression claimed by Metternich. There was no sense of unity among the Italian states and most of them were under foreign control like the Hapsburg dynasty of Austria and the Pope.

The Napoleonic conquest had a greater impact on the unity of the small Italian states by putting them one political entity for the first time by droving out foreign influences over the Italian peninsular.

As a result of Napoleon’s effort, Italy acquired the great heritage of the French revolution such as equality before the law, religious liberty, freedom of the press and self-government.

The defeat of Napoleon in 1814 by the European powers, made the major powers to call for a Congress in 1815 at Vienna to restore the status quo of 1789 Europe, territories were divided according to their own interests and this caused several revolts throughout the whole of Europe in the 19th century.

Subsequently, the unification of Italy was majorly based on some nationalist and patriotic individuals most especially the three indispensable personnel like Guiseppe Mazzini, Count Cavour and Guiseppe Garibaldi.

We cannot discuss the unification process in isolation with their activities which will be discussed in the following paragraph.

The soul and spirit of the Italian unification were a man called Guiseppe Mazzini. He want not only united Italy but with a republican form of government. He joined the secret society ‘Carbonari'(the charcoal burners).

As a result of his knowledge about the democratic government, he led various revolts against the government in the 1820s and he was arrested but not found guilty.

While he was in prison, Mazzini had already drawing plans for his future action, he put all his personal interest aside and he devoted himself to the cause of Italian unity.

Mazzini having lost faith in Cabonarism, whose leaders are largely men of advanced years, decided to venture into Italian youth which made him to organized a society called “the Young Italy” in 1832 which the motto of society is Dio e Popolo meaning “God and people”.

The ideal of the society which was unity and independence began to spread vigorously that within the range of two years it has a membership of over fifty thousand.

The society helped in popularizing the ideal of nationalism throughout the Italian peninsular especially among the students, young professional men and mercantile classes. Mazzini’s major aim was to educate the Italians that Italy was a Nation and not a geographical expression, and also that the whole peninsular was a living unity with a common heritage of traditions and historic memories.

Though Mazzini failed to establish a republic in Italy in 1848, his propaganda create a vigorous public opinion in favour of national independence and unity. Because of his various activities, he was accepted as the forerunner for Italian unity.

Furthermore, after the 1848 revolution that brought in central Europe the task of achieving Italian unity became solely on the kingdom of Sardinia-Piedmont. Other Italian royalists looked upon the kingdom for leadership because it is one of the most independent and industrialized Italian states after the Congress system.

Piedmont possessed some influential liberal middle class and a strong army which could challenge the Austrian Dominion and the kingdom is in the best position to promote nationalism.

By this attribute, the first action to be taken was the establishment of constitutional government by king Charles Albert in 1848. Austria being the major Italian problem in the unification process was challenged several times but it failed.

The failed attempts made Charles Albert abdicate the throne for his son Victor Emmanuel Il in 1849. The failed attempts by different actors to oust out Austrian domination in the Italian peninsular made the unification seems unclear but the coming of Count Cavour brought the hope alive again.

More so, the dream of Italian unification was finally realized by the activities of Count Cavour the prime minister of Victor Emmanuel II. Cavour was a Piedmontese nobleman by birth. He had served sometime in the Engineers corps of the Sardinian army, but his liberal principles made him resign in 1831.

He was infused with liberal ideas and became a strong supporter of constitutional government due to his extensive reading of English authors and his experience in England. In 1847 he devoted himself to securing a constitution for Piedmont and his several articles which one of which was titled “Il Risorgimento” had a great influence on the King as well as on public opinion.

After granting Piedmont a constitution by Charles Albert, Cavour became a member of the parliament under its provision. Two years later, he was appointed as the minister of agriculture and commerce and in 1852 he became the prime minister until his death in 1861.

Also, Cavour believed that before that taking the leadership of Italian unification, he desired to strengthen the kingdom of Piedmont by introducing various reforms politically and economically.

He said Piedmont must begin to raise herself. To achieve this great responsibility, Cavour started with the strengthening of the army and in his view, he said for Piedmont to take the leadership role, she should be ready for new war.

He organized the army, built new fortresses and strengthened the old ones and increased the military resources. He also concentrated on the development of industry and commerce, social amenities were developed.

After the internal developments Cavour believed that unification cannot be achieved in isolation he needs foreign assignment and by so doing he sought France help by assisting her in the Crimean war (1853-56) and he supplied her army.

This gave Piedmont say in the Congress of Paris in 1856 in Cavour personally represented Piedmont and he denounce the influence and misgovernment of Austria in Italy.

The Role of France

France under Napoleon lll proved to be a good ally because it was a traditional enemy of Austria and any loss of Austrian influence would be beneficial. Napoleon lll showed favour to a liberated and United Italian peninsula. Both leaders met secretly at Plombieres on July 21, 1858.

After this agreement, Piedmont stirred up trouble in a territory controlled by Austria forcing her to go to war and with this Austria requested for Piedmont disarmament but she was reluctant and there was war, also by a supreme and clever and unscrupulous diplomacy and war against Austria was justified and with the aid of France, Austria was defeated at Magenta on 4 and on 24 June at Solferino in 1859

But at the peak of this war Napoleon lll withdrew without the consents of Piedmont and went on to sign an armistice of Villafranca with the Austrian emperor in July 5, 1859. The partial defeat made Piedmont gain Lombardy from Austrian dominance by the treaty of Zurich on November 10, 1859, but Venetia remained under Austria.

In the same vein, other northern Italian territories like Parma, Modena, Tuscany and Romagna revolted against their leader and expelled them in which they declared union with Piedmont.

But for the official merge of the territories, they needed the approval of France in which Napoleon lll demanded Savoy and Nice and it was granted reluctantly. The North Italian kingdom was created.

In addition, in uniting the southern part Garibaldi was the sole actor. He appeared to save the situation in the southern part. He joined Young Italy and participated in the attempted insurrection at Genoa in 1833. He spent most of his life in exile.

His prosperous years in New York and his experience on guerilla warfare inspired him to come back home while he was able to acquire the island of Capera off the coast of Italy, where he began his activities and waited for the growing opposition of the Bourbon rule in the kingdom of Naples and when it’s the right time, he collected a thousand red shirts at Genoa.

The United Kingdom of Italy Proclaimed

In May 1860 Garibaldi attacked Sicily and he won the battle and took control of the region. After a plebiscite, Naples was annexed to Piedmont, Garibaldi refused all honour and he withdrew to the island of Capera.

By 18 February 1861, the first national parliament representing the North and South met at Turin. The United Kingdom of Italy was proclaimed under the leadership of Victor Emmanuel Il on 17 March 1861.

However, the unification was not finally achieved, until 1871 after the two different wars Austro-Prussia war 1866 and the Franco-Prussia war 1870/71 which ceded Venetia and Rome to Italy.

In conclusion, with the above analysis, it is pertinent to say that the unification of Italy follows both ideas and a forceful process. The activities of some nationalists discussed above (Mazzini, Count Cavour and Garibaldi) were appraised in the unification process.

The diplomatic practice of Cavour in defeating Austria as the major enemy was credited and the rigorous activities of Mazzini and Garibaldi and there were later immortalized. Finally, it is justifiable to say the unification of Italy was through the Republicans and the Federalists.