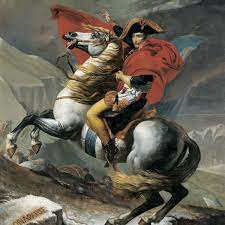 Napoleon Bonaparte was born at Ajaccio on the island of Corsica on 15 August 1769 that was one year after the island was transferred to France by the Republic of Genoa. He assumed the position of Consul, and later, Napoleon both after the French Revolution of 1789

Therefore, Napoleon was a French citizen from his birth. Napoleon is the most significant personality that had left viable impacts and impressions on the history of Europe. Napoleon maximized the turbulence in France to establish a place for himself in the political disposition of France, and also, spread the ideas of the revolution across the whole of Europe, even down to (African) Egypt.

Napoleon had a very rapidly growing career due to his hard work and incompatible military prowess that in just a few years, he had assumed several ranks in the military.

“The newly established Republic of France though had driven from the field the greater number of its enemies was still left at war with England and Austria.” With the continuous enmity among the European powers, France initiated an advance to Italy in order to attack the Austrian possessions in the region. Therefore, Bonaparte spearheaded the Italian Campaign (of 1796 -97).

Bonaparte recorded more success in Italy, which resulted in territorial gains for France. “The French boundaries extended up to the Rhine, the Austrian Netherlands (Belgium) were annexed and in the north of Italy a vassal republic (Cisalpine) was created which was French territory in all but name.”

While Bonaparte was in Egypt, he tried to shun happenings concerning Europe, reading and considering largely on newspapers and dispatches from France. As the Egyptian campaign was depreciating, the knowledge of the political instability that was surging in France and the news of the establishment of a second coalition against France prompted Napoleon to leave Egypt.

Napoleon Bonaparte returned to Paris in October 1799. There were great improvements in the military situation of France as a result of several won battles. During this time, the government was not only bankrupt but also the Directory was corrupt and inefficient. It was wholly unpopular among the people. The country was in need of a vanguard that could reclaim its lost glories.

Therefore, Bonaparte was approached by Sieyès, one of the Directors, who sought his support for a coup to overthrow the constitution. “On 9 November 1799 (18 Brumaire), and the following day (19 Brumaire), troops led by Napoleon seized the control of the council which was in session in the palace of St. Cloud away from Paris.”

Napoleon as the First Consul

During the period of the Consulate (1799-1804), Napoleon established several enduring reforms, “including centralized administration, higher education, a tax system, a central bank, law codes, and road and sewer systems.”  He also established peace between him and the church when he negotiated the Concordat of 1801 with the Catholic Church, which sought to reconcile the mostly Catholic population with his regime.

“His set of civil laws, the Code Napoleon or Civil Code, has importance to this day in many countries. The Code was prepared by committees of legal experts.”

Napoleon became the emperor of France on 2 December 1804, in a ceremony at Notre Dame de Paris which was presided over by Pope Pius VII. “Napoleon created a titled court that included many of his statesmen and generals as well as ex-royalists.”

Napoleon surrounded himself with people he trusted and he became the number one personality in both the political arrangement and others. And in the next few years, his family members were used as political leaders of several places in Napoleonic France.

Thus, Napoleon‘s rise to power was spectacular, and not by a mistake. Napoleon used his bravery, incompatible military ability and statesmanlike qualities to establish an unchallenged, most significant position in France resulting in his coronation as the ‗Emperor of the French. “About his rise to political power in France, Napoleon had said, ―I found the crown of France lying on the ground and I picked it up with my sword.”