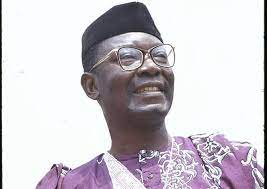 Nnamdi Benjamin Azikiwe (16 November 1904 – 11 May 1966), usually referred to as “Zik”, was a Nigerian statesman and political leader who served as the first President of Nigeria from 1963 to 1966. Considered a driving force behind the nation’s independence, he became known as the father of “Nigerian Nationalism.

Azikiwe was equally prominent with a remarkable career and prolific writing talent. Educated in the United States, he was influenced by the Pan-Africanist ideas of Marcus Garvey and George Padmore.

From the 1930s onward, he became a radical anti-colonialist fighter. His philosophy and works incorporate virtually all the major stands in African political Thought, Pan-Africanism, Nationalism, Nation-state, ethnicity, development and military rule.

He was a learned man as well as a notable activist. Like his contemporaries, he called for colonial disengagement and blamed many of African woes on the Europeans.

His commitment to Pan- Africanism was less sustained than Nkrumah’s as he later played the politics of regionalism in Nigeria, pursued wealth accumulation in order to attain political dominance and eventually had to defend the cause of his ethnic group, the Igbo of Eastern Nigeria.

Born in 1904, he had direct exposure to the colonial bureaucracy and to colonial changes. His father worked as a clerk for the government and lived with his son in an emerging heterogeneous Nigerian city.

Azikiwe himself complained about the slowness of his career mobility and in 1925 went to the United States for further education. In a fascinating memoir, he narrated how discrimination and hardship (the consistent weapons against so-called aliens or foreigners in the United States) almost pushed him to commit suicide and how he struggled to complete his university education.

The American experience remained with Azikiwe for the rest of his life. He was impressed by its democratic government (in contrast with the colonial administration in his home town, country) and with its media. He was persuaded by the ideas of leading African- American thinkers such as W.E.B Du Bois and Leo Hansberry.

He returned to West Africa in 1934, where he emerged as a leading nationalist. Charged with sedition in Ghana in 1938, he relocated to Nigeria to re-establish his newspaper industry.

In a politically astute manner, he turned his media into an extension of his personal politics and his vehicle to express anti-British propaganda, beginning to mobilize the people.

At the same time, he was enunciating a political philosophy, that Africans must wrest control from Europeans, unite, overcome all divisive politics and solve the problem of the “colonial mentality”. That feeling that everything European was superior

In his political theory, Nnamdi Azikiwe, in 1943, enumerated five principles that are vital to the political emancipation of Africa, and they could also be referred to as the five canons of Zikism. His aim was to provide a foundational structure on which a free national political system was to be built. These canons include;

While talking about spiritual balance, Azikiwe called for respect for the opinion of others. This would involve allowing others the right to state their opinion without denying one’s right to state his or her opinion, what can be referred to as the cultivation of the spirit of tolerant skepticism for the views of one’s antagonists

Azikiwe calls for the Jettisoning of all forms of prejudice in racial, national, tribal, societal, political, ethical areas, etc. This takes us back to Francis Bacon’s Idols, which are themselves prejudiced.

But while these prejudices in Francis Bacon impede the acquisition of knowledge in Zikism, they impede the realization of political regeneration.

Nnamdi Azikiwe makes this call because an African, no matter where he or she is born, is an African. To postpone the breaking down of all forms of barriers of tribal prejudice, be they inter-tribal or intra-tribal, is to postpone the social unity of Africa

This was the idea of Zik when he called for “a state of society where the mind is brought into harmony with the matter… a psychological conception deeply rooted in a material environment; He further argues that “The usefulness of any concept, idea or theory, lies in its implications for the practical solutions to the problems of society.

In this sense, pragmatism requires that man’s efforts and intelligence should be geared towards the liberation of man and the satisfaction of his needs in society” and so our education should be aimed at providing means of livelihood for Africans, to fail in this regard, Azikiwe argues, is to dent the African social fabric.

The slave trade and colonization of Africa created a situation of the „crisis of self-confidence‟ in Africa, which has opened apertures for a lasting barrier to growth and innovation.

Azikiwe argues that there is no specific proof to sustain the idea of superiority or inferiority of any race and for the African to cultivate an inferiority complex is to sign the death warrant of Africa’s future.

He calls for emancipation from the crisis of inferiority and assures the Africans that he had a glorious past and can design a more glorious future.

Zik wants the African to follow Socrates‟ principle: Gnothi seauton, (Man know yourself), and like a sleeping giant wake up from his slumber and harness his power for his own good and that of mankind

If Africans cultivate a spiritual balance, experiences social regeneration, cultivate and realize economic self-sufficiency and mental emancipation, they will certainly find themselves or themselves in a state of “political Risorgimento” (renewal or rebirth).

Zik says, “Politics is a means to an end which is more glorious than the means through which this end must be attained. Socially, the end is a guarantee of social security, and a right to enjoy life, liberty and the pursuit of happiness, just as do other peoples.

Once this is attained, a people can boast of a stable and reliable political system”.

He had a commitment to the emergence of a democratic Nation-State, where problems of ethnicity and wealth inequity of wealth would be minimal.

In some words, Azikiwe was trying to reject aspects of the Nigerian past, including such things as informal education, unscientific superstition the power of traditional chieftaincy, and loyalty to the clan.

For Azikiwe, Africans were not inferior but they were yet to maximize the benefits of their talents and brains. Unlike Nkrumah, he was not a strong advocate of a united African, believing instead in the colonial boundaries that defined the new nation-states.

He talked about the ’United States of Africa’’, but in the context of cooperation between independent countries.

It was not that his nationalism was just about Nigeria or that his knowledge was limited, but he saw nothing wrong in identification with countries created by Europeans.

He was also never a firm believer in socialism, although he used this ideology whenever it suited his political ambition

Though he wrote his treatise decades ago, his philosophy still runs deep and has astonishing relevance today in this century 21st. Since the book’s publication in 1937, somehow, Africa skipped her rebirth and instead, chose the path of the still-born.

And somehow, the generations between the start of the Zikist Movement and the rubbles of a present-day broken continent have been sadly conspicuously silent. Azikiwe’s exhortation in Renascent Africa was directed to not just the youths of Africa but also to African members of the old guard.

In his time, this referred to traditional chiefs and conservative pro-colonial politicians. In our time, this refers to our rulers, dictators and corrupt elites who by greed and intellectual myopia have collectively ground the continent to a halt.

In Azikiwe’s study of the Nigerian nation, he describes the Nigerian nation as having evolved from tribe to nation, tribe, in the sense of an endogamous group descended from the same ancestor, occupying a particular territory and possessing cultural, religious and linguistic homogeneity.

In Nigeria, he observes that there are about 400 such tribes who have united and formed a political union in the form of a federation. From this, Zik envisages a threat to national unity.

He raises the all-important question: will the new autonomous state endure? Tribalism, he observes, is a reality, but proposes that even in the midst of tribalism, national unity can be a reality.

How the reality of tribalism can be adapted to the unreality of national unity to make national unity a reality is one of the basic concerns of Zik. He enumerates the solution, which he refers to as keys:

To discover the circumstances which can be superimposed on the natural chains of language and culture, which has linked the human beings who inhabit Nigeria to enable them to develop a feeling of personal security and group preservation.

He proposes a federal system of government that will concede coexistence to all linguistic groups, on the basis of equality, within a framework of political and constitutional warrantees.

Such a federal system of government would protect individual freedom under the rule of law and thus preserve and sustain any linguistic group.

By preserving the linguistic groups of Nigeria and conceding to them local autonomy of some satisfactory nature, an atmosphere for respect of their culture and traditions is created.

If loyalty to the nation must not be replaced by loyalty to the tribe, Zik calls for the revision of Nigeria’s Republican Constitution: first in relation to safeguarding people’s fundamental human rights; secondly, providing citizens with adequate food, comfortable shelter and a minimum level of subsistence.

In this case, rulers must discover the material needs of their people. Once there is a failure in this by rulers, Nigerians will harbour grievances about political, economic and social inequalities. This will increase loyalty to the tribe and disloyalty to the nation

An effective way to increase national unity is to concede to each region de jure equality and de facto inequality. By de jure equality, Zik speaks in the sense that every province and local authority in each region in the Federal Republic of Nigeria is legally equal with the federal government providing for each of them.

By de facto Inequality, Zik means the acceptance of the fact that not all regions, provinces and local authorities are equal either in area, population, natural resources and financial means.

Again, Azikiwe argues that political parties will have to cut across the artificial barriers of tribes and regions. National loyalty must supersede regional claims

Conclusively, the rise and triumph of the ethnic and regionalist tendencies in Nigeria from 1967 has spiralled into its current headache, bred and led by her sons of Anarchy.

But Zikism provides Nigeria with an alternative to national miasma, and on the strength Azikiwe’s renascent and humanist philosophy this paper believes in the imperative of a Nigerian Risorgimento.

It is in Nigeria’s interest. Nigeria’s rich human tapestry is its greatest strength, and might also be its major downside if improperly managed.

The Igbo themselves say, “: Umunna wu Ike; Umunna wu kwa Oria Ukwu!” A man’s kinsmen are as much his strength, as they are his waist pains. In the Azikiwe context, the Nigerian problem is a class question, rather than the problem of ethnic difference.

Azikiwe taught that by harnessing the strength of Nigerians, everywhere in Nigeria, we could build a great, united, and prosperous nation.

Omolusi Precious is a student of History and International Studies, Adekunle Ajasin University, Akungba-Akoko. He is currently a columnist on African Histroy Archives on Tadexprof.