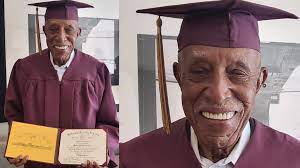 Cooper created a story that is one of the things that has been trending on the internet since three days ago. This is the news of the success of a man who has lived for over a century (101) and yet managed to secure his high school diploma after waiting for over 80 years.

This is Merrill Pitman Cooper; the man that showed the world the real definition of success. Cooper has passed through many stages of life and has had a lot of experiences, but he never let his age-long dream fall from him.

His story is a very strong motivation for everyone who has lost hopes in pursuing their dreams which seem inauspicious to them.

Cooper attended Storer College in Harpers Ferry, West Virginia, in the United States from 1934 to 1938, but unfortunately for him, he dropped out during his senior year when his family relocated to Philadelphia for financial reasons.

In the wake of the Civil War, this college was established, precisely in 1865 to serve newly freed slaves. Therefore, this school became one of the only educational resources for West Virginian Black residents.

“It served more than 7,000 students before closing in the mid-1950s. At the college, Cooper studied Latin, biology, history, English, and mathematics.”

Cooper regretted over not earning a diploma in 2018, after a “long and accomplished career in the transportation industry.”

He then visited the school, now part of Harpers Ferry National Historical Park expressed his regret to his family members and they started the process for him to secure a diploma in the school.

Cooper’s family consulted the park staff to honour him with a ceremony and diploma on the 19th of March.

With the engagements of these bodies, Cooper was able to secure his high school diploma at the age of 101 this March 2022!

According to George Eliot, “it’s never too late to be what you might’ve been”. Cooper just showed us the real motivational, driving force behind every successful person, which is determination!

You will always be “too…” when you are planning to execute your plans to be successful. You may be ‘too’ broke, too young, too old, too introverted, too extrovert, too shy or bashful…..

But against all these odds, you should always be ready to challenge the ‘too’ question which suppresses your inspiration to be successful.

Cooper just showed us that success has no deadline. There is no successful person in life without his own version of stories. Be determined to always crush your ‘too’ challenge!