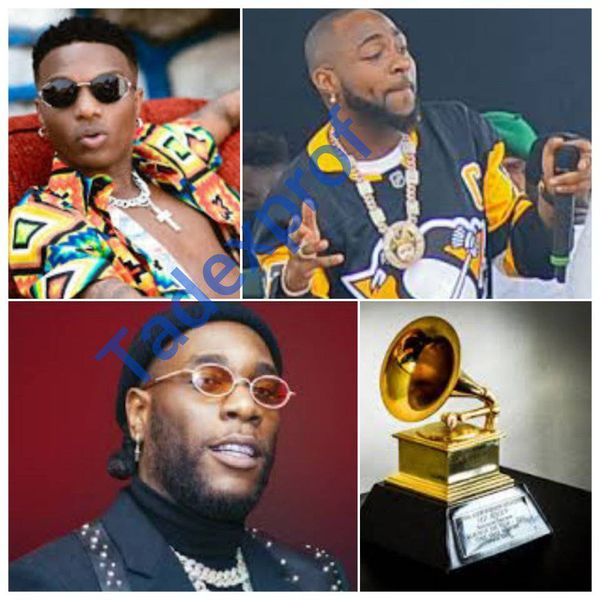 The Grammy Award (stylized as GRAMMY, originally called Gramophone Award), or just Grammy, is an award presented by the Recording Academy to recognize “Outstanding Achievement in the music industry” of the United States. The trophy depicts a gilded gramophone.[1]

Wizkid was nominated alongside fellow Nigerians –Femi Kuti, Burna Boy and Tems for Best Global Music Performance at The Grammys. But fortunately on the other side of the story, “Angelique Kidjo’s ‘Mother Nature’ Wins Best Global Music Album.”

Angélique appreciated the support of young African musicians like Yemi Alade, Burna Boy, Mr Eazi, and Shungudzoin the album. And more emphatically, she closed with this powerful statement, “We are all Africans.”

That is the beginning of some nonsense tweets on Twitter NG, specifically. When Nigeria lost this, some Nigerians who are fans of other artistes like Davido were very happy that Wizkid lost the Grammys.

Recently, Nigerian music superstar, David ‘Davido‘ Adeleke, has been featured on the FIFA World Cup Qatar 2022 Official Soundtrack released on Friday. It is a huge development in the country, but unfortunately, the guy did not receive congratulatory wishes from fellow artistes.

I think now we have the reflection of the blackness in us as it has been modified by contemporary foreign racial writers and scholars.  I personally do not have a great flair for music, but I do celebrate Nigerians, and I celebrate Africans.

There should be sense among the fans most especially in the way they treat their stars. The fans go the extra mile to create stories, blog them and make unnecessary issues get escalated. For what?

But can we even count Grammy awards a loss when our artistes do not win? Absolutely no! I feel cool seeing David performing the FIFA World Cup Qatar 2022 Official Soundtrack, and feel quite bad that we thought we lost when Wizkid did not secure the gramophone.

Whenever I come across posts on social media about foreign establishments, I wonder why Africa of the past is still not different from the present. As we say, “Africa has never needed the world; the world has always needed Africa.” But we cover the reality that the independence of Africa only lies in several centuries ago.

Africans then, during the most notorious slave trade in history, sold themselves into slavery in return for European luxury goods, ammunition and others. The Efik merchants via the office of the Ekpe society and the Aro people using the office of Arochukwu secured more slaves in the interior is an instance.

When they talk about civilisations, Africa is always the first place that comes to everyone’s mind, but is there any element of civilisation in our contemporary society apart from archaeological materials?

If we claim to be united and more civilised than the Rest and we never for once rest from internal crises, battling ourselves and creating more turbulent atmosphere for ourselves in order to achieve specific gains, it is nothing more than madness. In fact, I doubt if there is any other madness greater than this.

The very truth of the world civilisations is that Africa has been at a stage of development even before the existence of several civilisations. As this is open to historical debate, I will not like to furthermore on that (that will be in another article).

In every developed, interesting program in the world, it is unusual not to see an African in the system, especially Nigerians.

If the Nigerian government supported the Headies, it would be more appreciative and valuable to Africans than they leaving their home every year to seek for appreciation from foreign established programmes.

Nigeria can do it, but may not do it! This is Naija, appreciation of such a thing has lost ground in our system. In fact, the insecurity and staggering education are enough for daily discussion. (Businessday)[2]

The Headies (originally called the Hip Hop World Awards) is a music awards show established in 2006 by the Hip Hop World Magazine of Nigeria to recognize outstanding achievements in the Nigerian music industry. The annual ceremony features performances by established and promising artists[3]

The Headies awards can be supported and made globally available for the appreciation of the whole world, not only for Nigerians or Africans. I am oversure that if this was augmented to meet the world’s appreciation, a single artiste from Europe or America will not attend the event.

After Nigeria was beaten to a place in Qatar 2022 FIFA World Cup by Ghana after playing a 1-1, “Nigeria fans, who were angry the Super Eagles did not qualify, invaded the pitch, trying to attack Ghana players and destroying any objects in sight”

This says a lot about us. Where will the event be held? What are messages are we sending to the world?

It should be deleted from our mind that African artistes without Grammys are not great. Can we erase Nigerians, precisely from the world’s realm of entertainment? Never!

These ever-working artistes are not only great in Nigeria, but in the world. Nigerian artists should also ease themselves from serving foreign idols. You are great! If you weren’t, nobody would know you. God bless and help us settle Nigeria. Naija still make am!