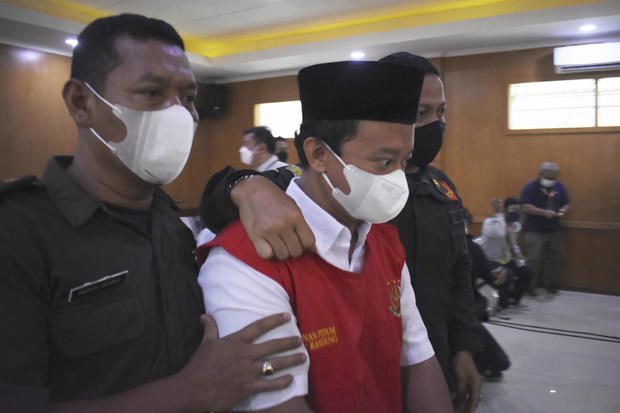 Rape, unlawful sexual activity, most often involving sexual intercourse, against the will of the victim through force or the threat of force.[1]

Today, April 5, 2022, a boarding school principal had been sentenced to death by an Indonesian high court, after he had raped not less than 13 students over five years and impregnated some of them.[3]

This man, Herry Wirawan, had been convicted by a “three-judge panel at Bandung District Court in February and sentenced to life in prison.”

“Herry Wirawan – who judges said sexually groomed 13 girls, aged between 12 and 16 years old and impregnated at least nine of his victims – was sentenced to life in jail in February but prosecutors who filed for the death penalty filed an appeal.”

From the year 2016 to 2021 at the school (hotels or rented apartments in the city of West Java), Henry had been accused of raping girls “between the age of 11 and 14 years.

This is one of the abnormalities and insane happenings in our society. The victims of this man did not cry because they were fearful.

“The Bandung High Court judges in their ruling Monday agreed with prosecutors’ appeal for the death penalty and for Wirawan’s assets to be seized.”

It is at this juncture very important to stress the line of religion attached to the story. This school was an Islamic school, according to popular publications, but Henry had tarnished and rubbished the reputation of Islamic boarding schools, just exactly as put by the ruling court via its website.

“The lower court had ordered Indonesia’s child protection ministry to pay $23,200 in combined compensation requested by the victims and between $600 and $6,000 for medical and psychological treatment for each girl, instead of seizing Wirawan’s assets.”

While the high court ruled for his assets to be seized, “including a foundation he owned, and auctioned to benefit the victims and their children.”

According to the judges’ rule, 9 children born to the victims should be handed over to the Children and Women Protection Agency with evaluation periodically.

The request for chemical castration by the prosecutors was also denied by the appeal court, stating that “someone sentenced to death or life imprisonment may not be subject to other punishments, other than the revocation of some rights.”

I am not interested in the smelling story, I am much more concerned about the lives of the victims who had been subjected to victimization for years until now.

Imagine the agony of rape. A lot of girls are suffering from one abuse or the other, yet dare not cry to the world because of fear. What a corrupt society!

In an investigation conducted by the West Java police, “parents of a victim went to the police after their daughter returned home on a holiday and admitted she had just given birth.”

“The case didn’t become public until November when court proceedings began. Police said they waited to publicize it to prevent further psychological and social damage to the victims.”

Conservative lawmakers and Islamic groups now want the bill to include prohibitions on extramarital sex and homosexual relations.

Despite legal means to stop sexual abuse in several countries in the world, it rather increases with unfortunate stories of agony, victimization and dejection. Do you think legal means, as in court rule, can be effective in stopping this unfortunate happening?