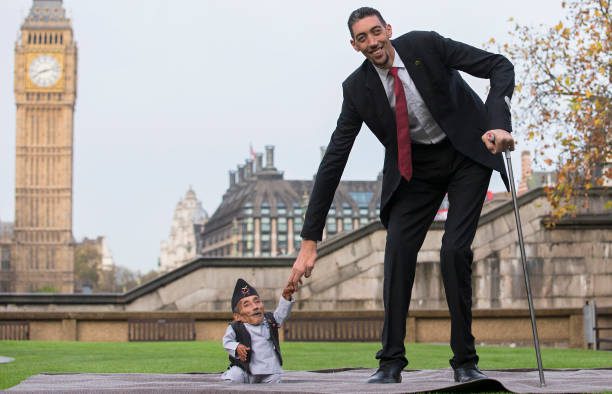 Chandra Bahadur Dangi (30 November 1939 – 3 September 2015) was a Nepali man who was the shortest man in recorded history. God created different beings in the world with different stature and looks. Pertinently, some people are born tall and some are short, while some are of average height.

Chandra Dangi is confirmed according to research as the shortest man in the world Dangi’s height was measured in 2012 with the same measure as the cans of baked beans, as he was 54.6cm (21.5in) and was announced the shortest adult human that has been documented, up till today no one is as short as him.

Chandra Bahadur Dangi was brought to the limelight in 2012 when a contractor who specialised in wood found him in his village in the Dang district, Nepal and took him to the media.

Meanwhile, Chandra being the shortest man in the world had siblings, brothers and sisters with three of his five brothers less than 1.22m (four feet) tall, while his two sisters and two other brothers are of average height.

In his village, Chandra helps look after the village’s cows as well as the buffalos. He was been taken care of by his immediate older brother and his family.

Dangi, despite his age, asserted that he had not been treated by a doctor or examined for any medical checkup,  let alone taking medication.

Chandra Bahadur Dangi as discovered lived all his life building head straps for villagers and placements in other to ease carrying loads for them.

Chandra only had the opportunity to leave his village for Kathmandu when he was to be measured by Guinness World Records officials in 2012 and visited the Nepalese capital for the first time.

Dangi Bahadur Dangi was born and grew up in a village called Reemkholi, 400 kilometres from Kathmandu Nepal’s Capital. Chandra had never left his village before his recognition as the world’s shortest man by the Guinness World Records in 2012.

In his words, after getting to the limelight, Chandra asserted that he has never travelled out of the village and had been willing to do so, and also wish to travel across the country even to popularise his village, Nepal and the whole country with his status.

Dangi Bahadur Dangi was recognized when he was 72 years in 2012 as he was born in 1940. Chandra also met the world’s shortest woman in the world in 2012, in Jyoti Ange of Nagpur, India. The duo took pictures together.

On November 13, 2014, during an event in London in one of the editions of The Guinness Book of Records, Chandra also met the world’s tallest man, Sultan Kosen.

Dangi gave up the ghost in America Samoa on 3 September 2015 when he was 75, in the Lyndon B. Johnson Tropical Medical Center in Pago Pago.

The cause of his death was not ascertained but it was discovered that he had been battling pneumonia.

Up till today, he has the record of being the shortest human in the world.