Home » Hamar Tribe: Women Receive Brutal Flogging On Their Bare Skin As A Show of Love 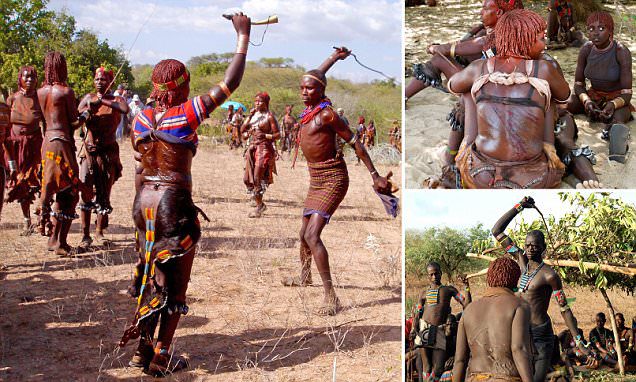 Hamar tribe is a place where women are being beaten while betrothing them to their husbands.

Hamar is a community inhabiting Lower Omo Valley, Southern Ethiopia. The people are mostly pastoralists, and their culture places a high value on cattle.

Hamar tribe are a group of over 50,000 indigenous people who dominate the Omo Valley, Southwest of Ethiopia, boarded by Kenya and South Sudan.

However, the culture and traditions of Hamar is one that is uncommon and the social norms showcases who we are and how we live our life.

There are some weird and eccentric cultures that are embedded in some tribes, and thus is however applicable to the Hamar people of Ethiopia. This simply shows brutality and eccentricity.

Whimsical but interesting, the Hamar tribe entails women being wiped and lashed with an excruciating beating by men to serve as love sign for their man, denoting a sense of honour to the man.

It should be noted that the women get married at the age of 17 while the men get married not until they get to their mid-thirties. The men perform transitioning rites from boy to man.

The brutal tradition is called Ukuli Bula and is always captured by photographer Jeremy Hunter. A noteworthy characteristic of the ceremony is the beating of young women who are family members or relatives of the boy undertaking the Rite-of-passage.

The women intentionally surrender themselves to be beaten during the ceremony of Ukuli Bula, indicating courage and endurance for love, which is also termed as a form of an insurance policy.

However, the women sing, and also extol the virtues of the jumper, proposing their love for the husband-to-be and for the desire to be marked by the whip. Instead of fleeing, women still plead with the men to whip them more.

Notwithstanding, the family members have to show their support for this inhumane act of transition by contributing to the whole process.

The siblings of the girl are also whipped alongside, even the mother putting them in severe bleeding, and excruciating scars, which shows the man will be indebted to them forever.

With the beating, whenever the family members make a request from him in hard times, he must be responsive, when he recalls what they went through for him to become a man.

Another thing to note is the cow jumping which is also a ceremony/ Maza initiation that must be performed before any male member of the house can marry, and so the women will continue to endure.

The family also witness the wedding ceremony after being flogged. It is believed that a woman who has many scars will make a good wife, prompting them to beg their husband to give them a thorough beating, so she won’t be tagged lazy.

However, the women will dance and blow horns while being flogged and making demands “I want to be whipped by this Maza until his miceres have been finished off! I will finish all his miceres!”.

The man will also marry a woman with his empathy towards the scars she received during the initiation which largely depends on how deep they are.

The family are being flogged and they are not expected to scream or leave the ceremony, but rather beg for more strokes.

Also,  they claim to be trance – during the process and wouldn’t feel pain. The already initiated male – Maza, will respond to the women’s cries for more strokes till their canes are totally broken.

The alarming part is that young girls marry men very much older than they are, and would die before the women, which makes them widows at a young age.

Sadly, men are allowed to beat their wives without giving any explanation for their wicked acts.

While some tribes see this as human rights violation. But these women will walk miles after miles to be part of the ceremony. With joy – gladly taking strokes that could make anyone faint – at the sightings of being beaten.

During the initiation process, the man is made to jump over 15 cows, 6 times without falling, or risk being beaten by the women there at the rites. The man pays 20 heads of cows and 30 goats to marry a woman.

Also, widows of the tribe aren’t allowed to remarry.

However, when beatings are excessive, the family steps in. This can go on till she has given birth to two children. The Hamar women, see the act of enduring being whipped; with flesh-tearing whips as proof of their love for the man, and will gladly show you those scars – to tell you how much she loves him.

Pertinently, the men’s scars are a result of battles, something the women are proud of; and would want to commensurate. Like the men, the women are expected to be as strong and capable of doing manly chores.

For the Hamar tradition loyalty and support is the focal point; love is not a show of poetry, but of sacrifices – the more scars you have, the more your affinity for your man.

Notwithstanding, they coat their bodies with butter to lessen the effect of the whipping which is only carried out by Maza – those who have already undergone this Rite-of-passage.

The ceremony unites the family and is a demonstration of the women’s capacity for love, and in later life – perhaps when they’ve become widowed – they will look to the boys who whipped them years before to request help.

The scars on her back are believed to be proof of her sacrifice for the man, and it is therefore impossible for the man to refuse her needs in hard times or emergencies.