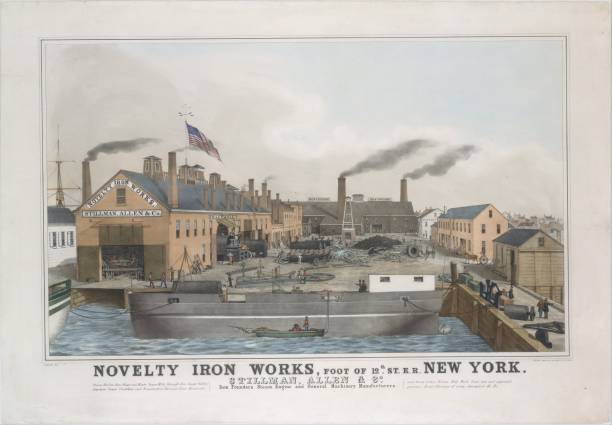 The development of the United States into an industrial giant commenced shortly after the American Civil War. In fact, the period could be appropriately dated to the years 1869-1899.

Thus, by 1900, because of the strong industrial base, America had become a pre-eminent economic power in the world.

As a result of this, an economy that had been characterized in the early 19th century by features such as small-scale handicraft industries and agricultural production had metamorphosed shortly after the civil war into a highly industrial nation.

As a result of this, America between 1869 and 1899 became characterized by the following features: mass production, mass consumption and time-clock efficiency, that is, punctuality.

The philosophical underpinnings of these developments were very obvious. First was the Calvinistic spirit of hard work. This enabled the Americans to apply their energies to their various callings and vocations.

Secondly, the Competitive spirit as enunciated by Charles Darwin in his 1859 work, The Origin of the Species also became a motivating factor in American industrialization process.

It was the belief of Charles Darwin that the natural world is made up of weak and strong species and in the competition for survival, the strong survives and the weak dies off. As a result of the popularity of this belief, the philosophy of the “Survival of the Fittest” became a major characteristic of American life.

The development of the railway business was at the forefront of the American industrialization. It would be recalled that the civil war severely hampered the growth of the American railway.

After the cessation of hostility, however, the railway company, especially the Union Pacific and the Central Pacific commenced the development of the American rail lines. They were soon joined by other competitors and together they created a gigantic or gargantuan railway programme, which secured a vector of national progress.

The railways opened up the west to population expansion. As this population moved to the west, the need for industrial products also rose and the railway played a prominent role on transporting the needed goods such as food products, household utensils, housing materials, fabrics and capital goods to the new areas.

As a corollary to this, productivity also became enhanced. The west also served as important avenues for new materials. The railway, therefore, facilitated the expeditious movement of raw materials from several other places to where they were needed at their factories.

The railways themselves directly contributed to the expansion of the industries through their own consumptions. This included iron and steel, coal, timber, etc.

However, the two most important inventions that revolutionized American industries and also directly changed the standard of living of the Americans were the Telephone by Alexander Graham Bell, and Electric Bulbs by Thomas Edison.

The commercialization of their inventions subsequently changed the patterns and pace of American industrialization as industrial production moved away from coal steam and water and windmill-driven technology to electricity-driven one.

As a result of this, a new generation of Americans developed and believed so much not only in the competitive spirit, but also in the impersonal spirit of “the survival of the fittest”.

Rockefeller built up interest in the oil industry and succeeded not only in sanitizing the industry, but also in driving out the small scalers whom he described as spoiling the American oil industry.

With his investments in oil, he created what became known as the “Standard Oil Corporation”, which developed into a strong and “Octopoidal Trust”, that monopoly.

With his wealth, Rockefeller was able to finance research in schools and universities. It would be appropriate, however, that he did this because it would be good for his public relations.

Andrew Carnegie developed interest in the financial world, iron and steel and railways. He amassed immense wealth and ploughs a huge amount not only towards personal satisfaction but also towards charity.

He was the apostle of great wealth, which he considered with the philosophy of “whoever dies rich dies disgraced”.

Just like the other two, J. P. Morgan also amassed incredible wealth based on his interest in iron and steel and railways.

These three figures constituted important personalities who not only enhanced American industrialization through their direct investment, but also in the development of American industries.

Through their activities and agitations, there were advances and changes as well as development in different areas such as wages, safety regulations, working hours, condition of service, etc.