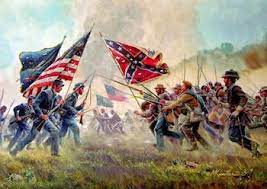 The period witnessed a flowering of several questions, which needed several answers. Central to the period were questions such as:

In trying to find answers to all these, the situation pitted both the Congress and its officers in a war for supremacy with the Presidency.

The Presidential or Lincoln Reconstruction Programme

President Abraham Lincoln had tried to stave off the rebellion that was to cost America thousands of lives and millions of dollars in taxes and development efforts.

The collapse of all the peace efforts inaugurated a horrendous civil war whose aftermath amounted to a continuation of the war itself. While the war was going on, Lincoln adopted a series of strategies designed to break the rebellion.

For instance, in 1863, he issued a Presidential proclamation readmitting peoples and states who renounced rebellion back into the Union. The strategy he adopted was a liberal one in which he required only a paltry ten percent of those who voted in the 1860 elections to swear allegiance to the Union.

Three states did by leaving the Confederation and thereafter reintegrated into the Union. These states were Tennessee, Arkansas and Louisiana. Lincoln appointed Military governors for the three states and the reconstruction programmes began in earnest.

In the same year, President Lincoln also issued the Emancipation proclamation, which was to free the Four million blacks in servitude. However, the emancipated blacks later constituted a major stumbling block for the reconstruction program, which ultimately pitched the presidency and the congress against each other.

In order to solve the problems encountered by the blacks who had nothing except their freedom, President Lincoln within the war department became known as the Freed Men Bureau under the leadership of General Oliver Otis Howard.

The situation was, however, compounded by the desires of the Congress to oppose the presidency at every twist and turn. It would be recalled that on 14 April 1864, President Lincoln had been assassinated and he was replaced by his deputy, Andrew Johnson.

Johnson, however, did not deviate from the programmes of his predecessor. This drew the anger of the congress. The congress, therefore, decided to take over the reconstruction programme by enacting in the same year what became known as the Wade Davis Act.

But in a fit of what became known as executive lawlessness, the President vetoed the bill. This veto, which was known as the “Pocket Veto” of the President angered the congress, which thereafter overruled the veto.

For instance, almost all the seceded states had been readmitted back into the Union with Lincoln’s ten percent plan. Unfortunately for the seceded states, the new congress was peopled by those who were fundamentally opposed to the lenient treatment of the rebels as enunciated by the Lincoln plan.

To make matters worse, all the readmitted states did not show any sign of remorse or that of having purged themselves of anti-Union activities. These states were overwhelmingly under the control of ex-confederate officials. Even the officials that were forwarded to the centre were ex-high confederate officials.

For instance, those voted into the congress from the south included few generals and eight colonels of the former rebel army. What again drew the anger of the congress was the fact that the so-called reconstructed southern states did not purge themselves of their anti-negro attitudes, which formed a principal basis for the outbreak of the civil war.

Almost all these states had instituted anti-black regulations collectively known as the “Black Codes”. These codes imposed a lot of disabilities on the black people. It prevented them from owning lands; they could not testify in court, except in cases involving fellow blacks and they could not get a job unless through a contract.

The implication of these for the blacks was an existence that was worse than slavery. The congress, therefore, decided to reverse the trend by instituting what became known as the Congressional or Radical reconstruction programme.

The Congressional or Radical Reconstruction Programme

The activities of the United States Congress ultimately overturned the Presidential reconstruction programme. One of the first major approaches adopted by the congress was the suspension of the formerly admitted states and the declaration of martial law (military law) to suspend all human rights.

Thus, apart from Tennessee where reconstruction work was going on nicely, all the southern states were divided into five military zones with Military governors. Secondly, the congress took over the Freed Men Bureau so as to make it more relevant to the yearnings of the freed blacks.

The new development in the south created a new beginning in which any state that wanted recognition by the Union must necessarily abide by new rules.

Under the new dispensation, any state that must join the Union must call together a convention that would ratify the new constitutions as well as pay allegiance to the Federal constitution.

As a corollary to this, the majority of the states must swear the “Iron Clad Oath”. Other important developments took place within the period. All states must sign and ratify the 14th and 15th amendments to the constitution.

The activities of the congress, no doubt, succeeded in restructuring the American polity and towards this end, the Congressional Act of 1867 played a pivotal role. By the 1870s, however, a new agreement had developed between the north and the south, which had serious implication for the reconstruction programme.

Thus, by the beginning of the 1890s, the reconstruction programme could be said to have come to an end.

Next Article: Topic Three: Social and Political Development in the South in the Period of the Reconstruction Programme