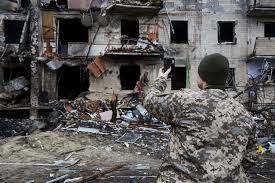 According to Ukrainian authorities, Russia is to blame for an overnight rocket attack that killed a newborn baby in a hospital maternity ward in the southern part of the country.

According to Ukraine’s emergency services on Wednesday, the baby’s mother, who was pregnant throughout the war, and a doctor were rescued alive from the rubble.

“At night, Russian monsters launched huge rockets at the small maternity ward of the hospital in Vilniansk. Grief overwhelms our hearts – a baby was killed who had just seen the light of day. Rescuers are working at the site.” On the Telegram messaging app, Oleksandr Starukh, the regional governor, wrote.

The alleged Russian raid in Vilniansk, which is close to the city of Zaporizhzhia, adds to the horrific casualties incurred by hospitals and other medical facilities as a result of Moscow’s invasion, as well as their patients and staff.

The most recent incident brought back memories of an air strike on March 9 that resulted in the destruction of a maternity hospital in the then-occupied port city of Mariupol, killing a pregnant woman and her unborn child.

Starukh’s photos show thick smoke rising above rubble mounds and being combed by emergency personnel against a dark night sky.

At the time, the only people in the ward were the mother, the baby, and the doctor.
The two-story building was said to have been destroyed by the emergency services.
The attack was condemned by Andriy Yermak, the head of the Ukrainian presidential office, in a Telegram post.

He claimed that Russia would be held accountable for “every Ukrainian life,” describing the Russian forces that invaded Ukraine on February 24 as “terrorists.”

The country that has been torn apart by war is getting ready for one of its toughest winters because the coldest season starts with Russian attacks that destroy important energy facilities.

It is anticipated that power outages will last for months and pose a threat to key services.
Every day, approximately 900 children enter a life of uncertainty. Sonia Khush, Save the Children’s country director for Ukraine, stated, “These mothers and newborns face a serious threat from the war’s chaos.
“We are hearing stories about women who went into labor early because they were always stressed and scared.

“More and more pregnant women were forced to give birth in basements or bunkers at the beginning of the war.Women are now giving birth in overcrowded hospitals, away from family, and in nations that are hosting Ukrainian refugees.

Despite the fact that there are fewer women giving birth in bunkers this year, their pregnancies are still just as stressful.

Vilniansk is located approximately 500 kilometers (300 miles) southeast of Kyiv, the capital of Ukraine, in the Ukrainian-held north of the Zaporizhia region.

Zaporizhia is one of four Ukrainian regions that Russia attempted to formally annexe in September, following international referendums that were deemed illegal and meaningless. Other parts of Zaporizhia are held by Russia.